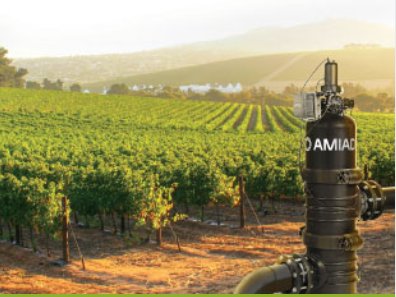 Profit before tax was down at $2.2m compared to $3.2m in H1 2017: however, Amiad said last year’s figure included exceptional gains from foreign currency hedging.

The company reported positive sales momentum, with  growth in revenue reflecting increased sales across most vertical markets in most geographies. This was offset by a reduction in revenue generated under the company’s distribution agreement with Netafim, which accounts for a significant proportion of irrigation segment sales, and weakness in the non-irrigation segment in Israel and India

The key geography of the US achieved a return to growth, with sales increasing by 17.5%.

The company also saw growth in sales in the municipal and oil & gas markets, which account for an increasing proportion of revenue.

“I am pleased to report this set of results that represents solid progress for Amiad. We achieved an increase in sales with positive momentum being sustained into the second half, including a return to growth in our key geography of the US. We continued to enhance our operational efficiency, and benefitted, in particular, from the contribution from our new in-house metal fabrication facility. Our operations were further enhanced with the completion of the integration of our TEQUATIC™ PLUS Filter acquisition as well as, post period, acquiring full ownership of our Amiad India subsidiary.

“We entered the second half of the year with positive sales momentum and anticipate reporting full year revenue growth for 2018 in line with market expectations. Looking further ahead, we expect to benefit from increasing operational efficiencies, growing sales from the new products launched this year and continued demand for our vast portfolio of solutions. As a result, we are confident of achieving a higher rate of revenue growth in 2019.”