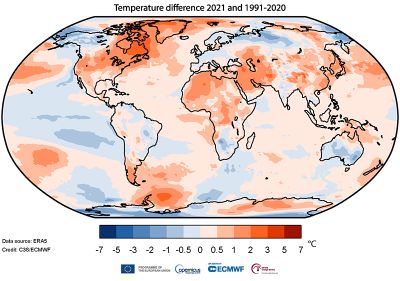 The European Union’s Copernicus Climate Change Service (C3S) has released its annual findings which show that globally 2021 was among the seven warmest on record.

Europe experienced a summer of extremes with severe heatwaves in the Mediterranean and floods in central Europe. Meanwhile, global concentrations of carbon dioxide and – very substantially – methane continued to increase.

C3S, implemented by the European Centre for Medium-Range Weather Forecasts (ECMWF) on behalf of the European Commission with funding from the European Union, has published new data showing that the last seven years globally were the seven warmest on record by a clear margin.

Europe experienced its warmest summer on record, though close to previous warmest summers in 2010 and 2018. In conjunction with the Copernicus Atmosphere Monitoring Service (CAMS), C3S also reports that preliminary analysis of satellite measurements confirm that atmospheric greenhouse gas concentrations continued to rise during 2021, with carbon dioxide (CO2) levels reaching an annual global column-averaged record of approximately 414 ppm, and methane (CH4) an annual record of approximately 1876 ppb.

Carbon emissions from wildfires worldwide amounted overall to 1850 megatonnes, especially fuelled by fires in Siberia. This was slightly higher than last year (1750 megatonnes of carbon emissions), although, the trend since 2003 is declining.

Compared to this latest 30-year reference period, regions with most above average temperatures include a band stretching from the west coast of the USA and Canada to north-eastern Canada and Greenland, as well as large parts of central and northern Africa and the Middle East.

The most below-average temperatures were found in western and easternmost Siberia, Alaska, over the central and eastern Pacific – concurrent with La Niña conditions at the beginning and the end of the year –, as well as in most of Australia and in parts of Antarctica.

The ten warmest years for Europe have all occurred since 2000, with the seven warmest years being 2014-2020. Several high-impact extreme events happened during summer 2021 in Europe. July saw a very heavy rainfall event in western central Europe in a region with soils close to saturation, leading to severe floods in several countries, with the most heavily impacted including Germany, Belgium, Luxembourg, and the Netherlands.

The Mediterranean region experienced a heatwave during July and part of August, with high temperatures particularly affecting Greece, Spain, and Italy. The European record for maximum temperature was broken in Sicily, where 48.8°C was reported, 0.8°C above the previous high, though this new record is still to be officially confirmed by the World Meteorological Organization (WMO).

Hot and dry conditions preceded intense and prolonged wildfires, particularly in the eastern and central Mediterranean with Turkey being one of the most impacted countries, in addition to Greece, Italy, Spain, Portugal, Albania, North Macedonia, Algeria, and Tunisia.

During 2021, several regions in North America experienced large temperature anomalies. In Northeast Canada, average monthly temperatures were unusually warm during both the start of the year and autumn.

An exceptional heatwave occurred in western North America in June, with maximum temperature records broken by several degrees Celsius, resulting in the warmest June on record for the continent.

Regional hot and dry conditions exacerbated a series of extreme wildfires throughout July and August. The worst affected areas were several Canadian provinces and west coast states in the USA, though not all regions were equally impacted. The second largest fire recorded in California’s history, the ‘Dixie Fire’, not only caused widespread devastation, but resulted in a significant reduction of air quality for thousands of people from the pollution.

CO2 and CH4 concentrations continue to rise in 2021

Preliminary analysis of satellite data shows that the trend of steadily rising carbon dioxide concentrations continued in 2021 leading to an annual global column-averaged record (XCO2) of approximately 414.3 ppm. The month with the highest concentration was April 2021, when global monthly mean XCO2 reached 416.1 ppm.

It is also close to the average growth rate of approximately 2.4 ppm/year seen since 2010, but below the high growth rates of 3.0 ppm/year in 2015 and 2.9 ppm/year 2016, associated with a strong El Niño climate event.

However, at present it is not fully understood why this is the case. The identification of the origin of the increase is challenging as methane has many sources, with some anthropogenic (e.g., exploitation of oil and gas fields) but also some natural or semi-natural ones (e.g., wetlands).

“Europe’s commitment to respond to the Paris agreement can only be achieved through effective analysis of climate information. The Copernicus Climate Change Service provides an essential global resource through operational, high-quality information about the state of our climate that is instrumental for both climate mitigation and adaptation policies. The 2021 analysis, showing that globally the warmest years by far were recorded in the last seven years, is a reminder of the continued increase in global temperatures and the urgent necessity to act.”

“2021 was yet another year of extreme temperatures with the hottest summer in Europe, heatwaves in the Mediterranean, not to mention the unprecedented high temperatures in North America. The last seven years have been the seven warmest on record. These events are a stark reminder of the need to change our ways, take decisive and effective steps toward a sustainable society and work towards reducing net carbon emissions.”

Vincent-Henri Peuch, Director of the Copernicus Atmosphere Monitoring Service, concluded that carbon dioxide and methane concentrations – the main drivers of climate change – are continuing to increase year n year and without signs of slowing down. “Only with determined efforts backed up by observational evidence can we make a real difference in our fight against the climate catastrophe,” he said.

C3S will comprehensively review different 2021 climate events in Europe in its annual European State of the Climate, due to be published in April 2022.

Copernicus is a component of the European Union’s space programme, with funding by the EU, and is its flagship Earth observation programme, which operates through six thematic services: Atmosphere, Marine, Land, Climate Change, Security and Emergency.

It delivers freely accessible operational data and services providing users with reliable and up-to-date information related to our planet and its environment.