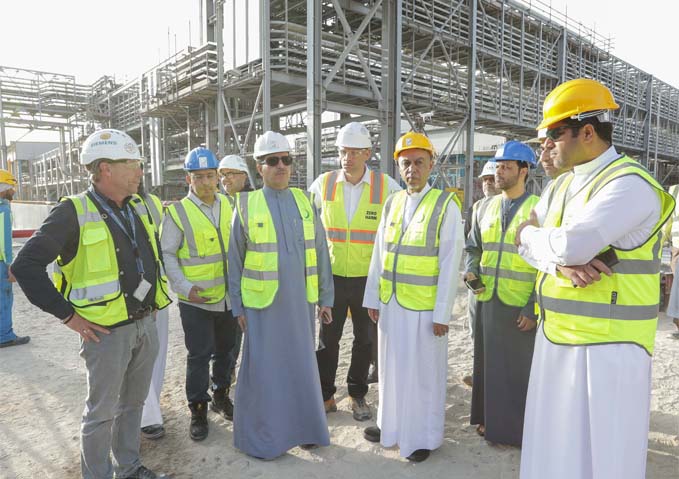 The Dubai Electricity and Water Authority (DEWA) has completed 98% of the M-Station expansion project at Jebel Ali, the largest power generation and water desalination plant in the UAE.

During the tour, Al Tayer was briefed by representatives from Siemens about the construction, engineering, and operational processes of the expansion project, with over 19.5 million safe man-hours.

M-Station’s current total capacity is 2,185 megawatts (MW) of electricity and 140 million imperial gallons of water per day (MIGD). The station also operates at the highest levels of availability, reliability, and efficiency, and uses the most advanced technologies in the world.

The expansion project includes new power generation units, with an added 700MW capacity, to the station’s current total. The expansion project has added two dual-fuel gas turbine generators, two heat-recovery steam boilers, and a steam turbine that is 90% fuel efficient. This will increase the plant’s thermal efficiency from 82.4% to 85.8%, which is one of the highest thermal-efficiency rates in the world.

When complete, the project will increase the station’s total capacity to 2,885MW. DEWA has started testing the turbines in the M-Station, including the initial operation of turbines and power generators as well as their connection to the grid. The tests are essential to ensure the quality and reliability of the units connected to the grid and are scheduled to continue until the completion of the project.

The project’s team is currently focused on preparations and operational status to assess the station’s readiness. After the completion of the initial tests, DEWA will commence testing the pilot operation of the plant.

A plan has been devised to conduct these tests according to best practices, and based on accumulated experience in this field, to achieve maximum reliability, efficiency, and safety. This reduces commissioning costs in three areas:

DEWA has been working with Siemens on the Jebel Ali M-Station expansion since 2015- the authority appointed Mott MacDonald as project consultant.

The combined total cost of the construction and expansion of M-Station, equipped with the latest smart devices and sophisticated heavy-duty technological systems, is AED 11.5 billion.

The project has been implemented in phases since mid-2010. Water desalination systems, costing AED3.95 billion, use 8 desalination units, deploying Multi-Stage Flash (MSF) distillation technology, each with a capacity of 17.5 MIGD and totalling 140 MIGD, two dual-fuel-fired auxiliary boilers of 390 tonnes per hour, and 16 fuel-oil storage tanks, each with a capacity of 20,000 cubic metres, with total fuel-oil storage of 320,000 cubic metres.

DEWA is continuously working to build a robust infrastructure to enhance its total production capacity, which is currently 10,927MW of electricity and 470 MIGD.