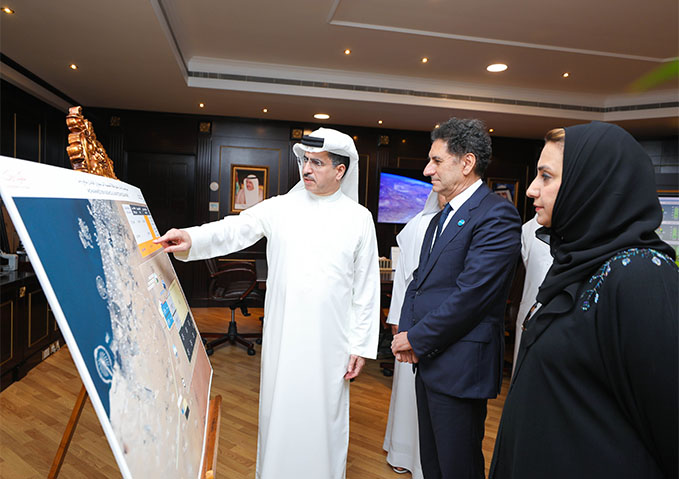 Al Tayer reviewed DEWA’s latest local and international projects and achievements during the meeting, as well as its role in promoting sustainable development in Dubai. He emphasized how important he believed cooperation between organizations such as DEWA and IRENA was and discussed how essential he considered it was to further develop the areas of  renewable and  clean energy and sustainability  to mutually benefit from shared experiences.

Al Tayer briefed the delegation about DEWA’s plans and how the organization was working to achieve the objectives of the Dubai Clean Energy Strategy 2050 which will see the emirate source 75% of Dubai’s total power output from clean energy by 2050.

Initiatives include the he Mohammed bin Rashid Al Maktoum Solar Park, the largest single-site solar park in the world, uses the Independent Power Producer (IPP) model and will have a capacity of 5,000 megawatts by 2030 with investments that total AED 50 billion.

Other issues covered during the meeting included the achievements of the World Green Economy Organization (WGEO), which is chaired by Al Tayer, launched in Dubai in 2016 in cooperation with the United Nations Development Program.

The WGEO’s aims are to promote the transition to a green economy, deploy green economy projects globally, and support countries and organizations seeking to achieve their green strategy and plans.

WGEO is a co-organizer of the World Green Economy Summit 2019 (WGES) held under the patronage of HH Sheikh Mohammed bin Rashid Al Maktoum, Vice President Prime Minister of UAE and The Ruler of Dubai which will take place in Dubai  from 20-21 October 2019.

The Summit is organised by WGEO and DEWA in cooperation with Dubai Supreme Council of Energy and WETEX.