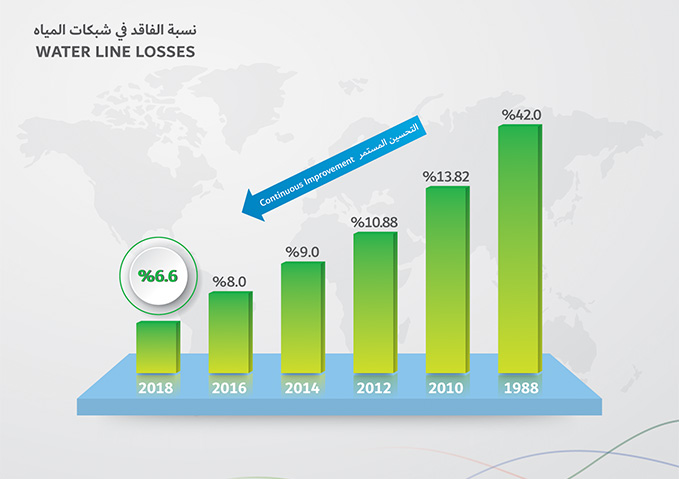 Dubai Electricity and Water Authority (DEWA) has made a new world record by reducing losses in its water networks to 6.6%, compared to 15% in North America, making it one of the lowest in the world.

The new achievement shows how Dubai Government organisations are surpassing their global counterparts.

“DEWA’s latest achievement in reducing losses in water transmission and distribution networks, from 42% in 1988, to 6.6%, confirms the success of its strategy in preparing for the future through scientific planning, innovation, using the latest technologies in water production, transmission, and distribution, as well as control of water networks. “

“It also highlights its strategy to increase the efficiency and reliability of Dubai’s electricity and water networks. This contributes to meeting the rapid growth in Dubai, thereby contributing to the social and economic prosperity of the Emirate. “

The achievement comes shortly after the UAE, represented by DEWA, was ranked first globally, for the second consecutive year, with scores of 100% in all ‘Getting Electricity’ indicators in the World Bank’s Doing Business 2019 report. The report measures the ease of doing business in 190 economies around the world.

Al Tayer said that DEWA will continue its efforts to enhance Dubai’s entire water network by updating old connections and meters, and developing new transmission and distribution networks that conform to the highest international standards.The authority has introduced a Supervisory Control and Data Acquisition (SCADA) system to monitor the water network, enabling an optimal and efficient network operation.

It also uses the latest equipment to scan the transmission and distribution networks to prevent cracks from causing leaks in the system.

DEWA use of the latest technologies in water production, transmission, distribution, as well as control of water networks has helped to making it one of the most efficient utilities in the world.