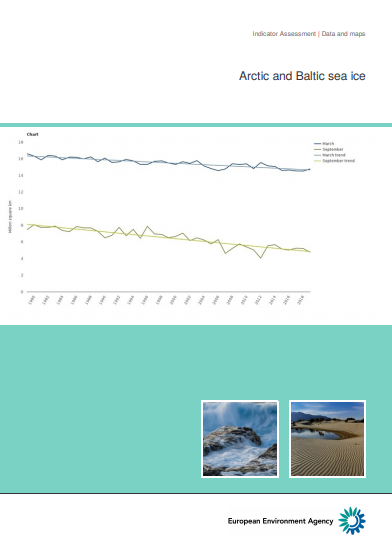 The European Environment Agency (EEA) is highlighting the rapid decline in the extent and volume of Arctic sea ice. Over the period 1979–2019, the Arctic has lost, on average, 82000 km2 per year by the end of summer and 42000 km2 of sea ice per year in winter.

The Arctic sea ice is also getting younger and thinner as less sea ice survives the summer to grow into thicker multi-year floes. The annual mean ice thickness across the central Arctic decreased by 65% between 1975 and 2012. The percentage of ice that is at least 5 years old declined from 30% to 2% between 1979 and 2018.In the period 1979-2019, the sea ice extent in the Arctic decreased by 42000 km2 per year in winter (measured in March) and by 82000 km2 per year in summer.

The decrease in sea ice during the summer corresponds to a more than 10 % decrease per decade. The decline is unprecedented in the past 1 000 years based on historical reconstructions and paleoclimate evidence, according to the EEA.

The extent of summer sea ice cover in each of the last 13 years (2007-2019) was lower than in any previous year since satellite measurements began, in 1979. The minimum Arctic sea ice cover in September 2012 broke all previously observed records; it was about half the level of that recorded in the period 1981-2010. The winter sea ice extents recorded in March 2018 and March 2017 were the lowest on record.

The EEA says that the Arctic sea ice is projected to continue shrinking and thinning. At current emission rates, a nearly ice-free Arctic Ocean at the end of summer is likely before mid-century.

Reduced Arctic sea ice is accelerating global warming through the ice-albedo feedback. Arctic sea ice decline has also been linked to changing climate and weather extremes in Europe and beyond.

The maximum sea ice extent in the Baltic Sea shows a decreasing trend since about 1800. The decrease appears to have accelerated since the 1980s and Baltic Sea ice, in particular the extent of the maximal cover, is projected to continue to shrink.

The EEA has published data which illustrates changes in Northern Hemisphere September sea ice extent as simulated by CMIP5 models over the 21st century under different emission scenarios (RCPs). Sea ice extent is defined as the total ocean area where sea ice concentration exceeds 15 % and is calculated on the original model grids.

According to the EEA, the loss of Arctic sea ice is being driven by a combination of warmer ocean waters and a warmer atmosphere, including the earlier onset of summer surface melt. Changes in Arctic sea ice may trigger complex feedback processes in the climate system.

Commenting on Antarctic sea ice extent, the Agency said this showed an increasing trend from 1979 to 2014, but this trend has reversed recently, with the years 2016 to 2018 were all far below the average.

Improving the ability to track the observed rapid summertime melting of Arctic sea ice through modelling has been challenging. According to the EEA:

“Observations fall within the model range in recent modelling studies, but most models underestimate the recent sea ice decline.”

All model projections agree that Arctic sea ice will continue to shrink and thin and at current emission rates, a nearly ice-free Arctic Ocean at the end of summer is likely before the middle of the century. For a scenario with warming of 1.5 °C by the end of the century (relative to pre-industrial levels), the chance of an ice-free sea is approximately 1 %, whereas this rises substantially to 10-35 % under a scenario of 2 °C warming.