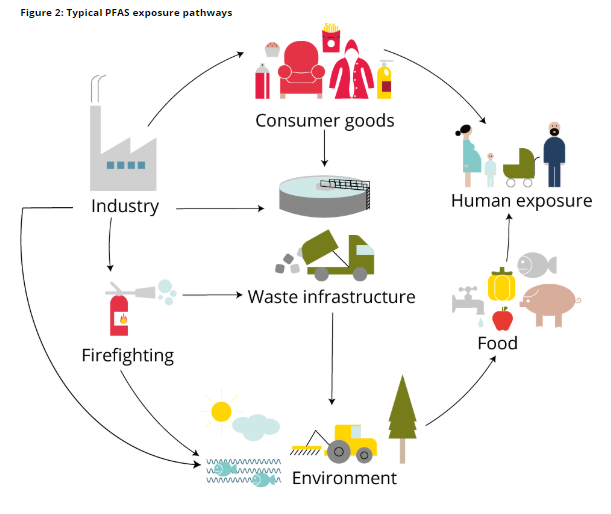 The European Environment Agency has issued a new briefing paper warning over emerging chemical risks in Europe to human health and the environment in Europe posed by a group of very persistent chemicals – per- and polyfluorinated alkyl substances (PFAS).

According to the EEA, it is currently not possible to perform in-depth environmental and health risk assessments of all chemical substances in use in Europe because of the great variety of chemicals and their diverse uses.

Comprising more than 4,700 chemicals, per and polyfluorinated alkyl substances (PFAS) are a group of widely used, man-made chemicals that accumulate over time in humans and in the environment. PFAS have been used in firefighting foams, non-stick metal coatings for frying pans, paper food packaging, creams and cosmetics, textiles for furniture and outdoor clothing, paints and photography, chrome plating, pesticides and pharmaceuticals.

Both new and legacy chemicals are continuing to be released into Europe’s environment, adding to the total chemical burden on Europe’s citizens and ecosystems.

National monitoring activities have detected PFAS in the environment across Europe. The production and widespread use of PFAS in products has resulted in the contamination of drinking water supplies in several European countries. However, very limited information is available regarding which specific PFAS are used in which applications and at what levels in Europe.

In some highly polluted areas, concentrations of perfluorooctanoic acid (PFOA) and perfluorosulfonic acid (PFOS) in drinking water were above the limit value for individual PFAS proposed in the 2018 recast of the EU Drinking Water Directive.

Human biomonitoring has also detected a range of PFAS in the blood of European citizens. Though the levels for the most prevalent, studied and regulated PFAS, PFOA and PFOS are decreasing, levels of more ‘novel’ PFAS are increasing. In some areas, concentrations of PFOA and PFOS in the most exposed citizens were above proposed benchmark levels for adverse effects in humans.

An assessment by the European Food Safety Authority (EFSA) in 2018 re-evaluated the multiple lines of evidence of PFOA and PFOS toxicities and concluded that a considerable proportion of the European population is expected to exceed the TWI due to intake of PFAS from food and drinking water.

In addition, PFAS pollution also affects ecosystems and generates costs through the need for remediation of polluted soil and water. The Agency says that such costs are currently difficult to assess since information on the number and scale of sites contaminated with PFAS in Europe and on how PFAS impact ecosystems is lacking.

Emissions to the environment occur via industrial waste water releases, as well as emissions to air from industrial production sites followed by deposition onto soil and water bodies. Industrial and urban waste water treatment plants are also a significant source of PFAS, via air, water and sludge.

Reuse of contaminated sewage sludge as fertilisers has led to PFAS pollution of soil and water in Austria, Germany, Switzerland and the US.

Areas around industrial production, manufacturing and application sites have been found to be particularly contaminated by PFAS. This has led to contaminated drinking water around factories in Belgium, Italy and the Netherlands, and around airports and military bases in Germany, Sweden and the United Kingdom The total number of sites potentially emitting PFAS is estimated to be in the order of 100,000 in Europe.

Costs to society from PFAS exposure run into billions of euros

Costs to society arising from PFAS exposure are high, with the annual health-related costs estimated to be EUR 52-84 billion across Europe in a recent study by the Nordic Council of Ministers in 2019.

Generally, regulated PFAS have been substituted with other short-chain and polymeric PFAS. However, several of the ‘novel’ PFAS and their short chain degradation products are also persistent. Novel PFAS are increasingly being detected in European surface waters – PFAS water pollution has been identified in countries across Europe, including Austria, Denmark, France, Germany, the Netherlands and Sweden, as well as outside the EU.

While both well-known and novel PFAS have been detected in drinking water in non-EU countries, at present there is little monitoring data available in the EU for drinking water.

A case study by the World Health Organization (WHO) documents the story of PFAS contamination of the drinking water of 21 municipalities in the Veneto region of Italy. Industrial activity in the area had polluted both surface waters and ground water, as well as the drinking water of approximately 127 000 citizens (WHO, 2017). Monitoring conducted by the authorities of the Veneto Region found PFOS in 63-100% of the locations sampled and PFOA in 100 % of the sites.

For comparison, the European Commission proposed a limit value of 0.1 µg/L for each individual PFAS in the 2018 recast of the EU Drinking Water Directive. This draft limit value was exceeded by a factor of 130 for PFOS and 66 for PFOA in samples taken in the Veneto Region.

PFOS and their derivatives are included as a priority hazardous substance under the EU Water Framework Directive.

A number of PFAS are also on the REACH list of Substances of Very High Concern (SVHCs). In June 2019, GenX (a short-chain PFAS substitute for PFOA in fluoropolymer production) was the first chemical added to the SVHC list on the basis of its persistent, mobile and toxic properties posing a threat to drinking water and the environment.

With more than 4 700 known PFAS,  the EEA says that undertaking substance-by-substance risk assessments and comprehensive environmental monitoring to understand exposure would be an extremely lengthy and resource-intensive process. As a result, complementary and precautionary approaches to managing PFAS are being explored.

This includes the regulation of PFAS as a class, or as subgroups, based on toxicity or chemical similarities. The proposal to establish a new ‘group limit’ value for PFAS of 0.5 µg/L, in addition to limits for 16 individual PFAS of 0.1 µg/L in drinking water under the recast of the EU Drinking Water Directive is currently under consideration at EU level. Such measures can be supported by cost-effective and targeted monitoring of PFAS in the environment to provide early warning signals of pollution.

In June 2019, the European Council of Ministers highlighted the widespread occurrence of PFAS in the environment, products and people, and called for an action plan to eliminate all non-essential uses of PFAS in a move towards zero pollution.