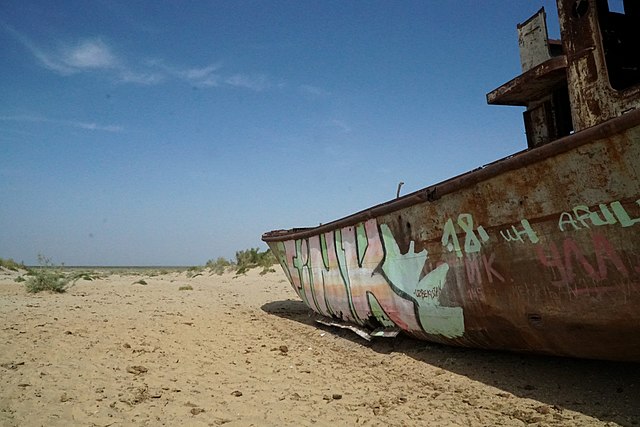 The European Investment Bank – together with other EU institutions, international financial institutions (IFIs) and the Government of Uzbekistan – has been drafting a set of comprehensive measures to help save the Aral Sea from extinction.

The Aral Sea is one of the worst man-made environmental disasters in the history of the modern world. The disaster directly affects more than 33 million people living in the Aral Sea basin with a devastating effect on the local environment and economy alike.

Reducing a sea to a pond

The Aral Sea disaster began in the 1960s, with the introduction of inadequate irrigation systems to support increased agriculture in the region during the Soviet era. Over time, ageing and deteriorating irrigation and drainage systems caused secondary soil salinisation and waterlogging, turning the land into a desert and rendering it useless.

In an attempt to remedy the situation and decrease the amount of salt in the soil, the Soviet authorities applied leaching water and surface irrigation techniques, two practices that caused further long-term damage. Inefficient irrigation systems and inadequate desalinisation attempts diverted a huge volume of water from the Amu Darya River, a major contributor to the landlocked Aral Sea.

As a result, the once mighty Aral Sea, formerly the fourth-largest body of water in the world, shrunk to the point of extinction creating major environmental, economic and social issues in Central Asia. For some regions, such as Karakalpakstan in Uzbekistan, preservation of the Aral Sea became a matter of life and death.

Ongoing efforts to save the Aral Sea

“Acting in its role as the EU climate bank, the European Investment Bank (EIB) recently joined the international effort to preserve the Aral Sea, building on the Bank’s decades-long experience in the evaluation and financing of environmental projects in more than 150 countries. The EIB is today working on a comprehensive package to alleviate the negative effects of decades of inadequate irrigation and enable Uzbekistan to gradually regain control of the environment and economy of the Aral Sea basin.”

The Bank is looking at an investment plan worth EUR 100 million to address the main sources of the environmental catastrophe and is working closely with partners in Uzbekistan to ensure maximum effectiveness of the Aral Sea rescue efforts.

“For the Bank, this is a step beyond our usual support extended to environmental protection projects. It is an investment of global significance, and an investment for the benefit of the entire world”, said VP Pavlova.

The programme is also being coordinated with the European institutions, including the European Commission, the European External Action Service and the EU Delegation in Uzbekistan. Dialogue with other international financial institutions, such as the World Bank, is underway to further expand the partnership and develop a truly sustainable operation, in the best interests of the people, environment and economy of Uzbekistan, Central Asia and the entire world.

The activities support the Government of Uzbekistan and its efforts to save the Aral Sea from extinction. In 2017 the Government launched an initiative for a United Nations Multilateral Trust Fund for the Development of the Aral Sea Region and currently works to plant around two million hectares of new plantations and forests, and claim back the land from the desert.

The EU bank is looking into ways to help modernise and refurbish the current resource-inefficient irrigation and drainage infrastructure and achieve sizeable water-saving targets of between 20 and 25%. This should reduce the level of water abstraction from the Amu Darya River and increase the flow of water into the Aral Sea.

“We are also looking at how to help restore the productivity of degraded and abandoned land and establish agroforestry sites for bio-drainage purposes. The result would be not just to economise the use of water but also to increase carbon sequestration via bio-drainage of degraded lands. We also want to ensure that any future project contributes to UN Sustainable Development Goal No. 15 and the UNCCD’s Land Degradation Neutrality (LDN) targets”, explained VP Pavlova.

The operation should also create conditions for sustainable and environment-friendly agriculture, which could justify similar climate action and environmental protection operations along the Amu Darya river basin over the coming years.

It could also result in a long-term, constructive EU-Uzbekistan partnership beneficial for both the EU and Uzbekistan as much as for the entire world.

“Saving the Aral Sea requires an ‘all hands on deck’ approach from the international community, both in terms of support and resources. If successful, it would allow us to undo a terrible mistake and leave a better world to our children”, concluded Lilyana Pavlova.