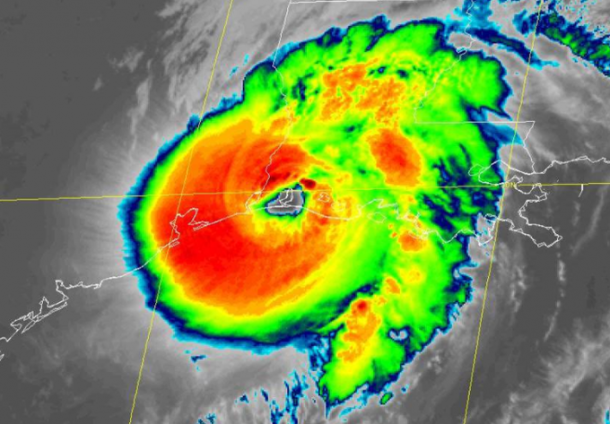 An already active Atlantic hurricane season is entering what is traditionally its most intense phase. Hurricane Laura has today made landfall on 27 August on the U.S. Gulf Coast at Category 4 strength, with maximum sustained winds of 150 mph (241 km/h).

The US National Hurricane Center said that after landfall, the eyewall of Laura pushed inland with catastrophic storm surge, extreme winds and flash flooding.

Tropical storm Laura strengthened into a hurricane on 25 August, after impacting the Dominican Republic, Haiti, Cuba and Jamaica as it made its way through the Hurricane LauraCaribbean.

On 26 August it became a major hurricane – Category 3 on the Saffir Simpson scale – as it fed off light windshear conditions and the warm Gulf of Mexico waters  towards the Northwestern Gulf of Mexico, according to the US National Hurricane Center.

NOAA Satellites  captured the landfall of Hurricane Laura at 1 a.m. CDT in southwest Louisiana near Cameron.

“Satellite images indicate that Laura has become a formidable hurricane,” the NHC said, warning that wind, storm surge, and rainfall hazards will extend far from the center.

In exceptional language, it warned of “unsurvivable storm surge” in worst hit coastal areas of Texas and Louisiana. This surge could penetrate up to 30 miles (48 kilometers) inland from the immediate coastline.

Laura is the first major hurricane in the Gulf of Mexico during August since Harvey in 2017.

NOAA’s updated hurricane season outlook issued on 6 August indicates that an above-normal hurricane season is very likely, and there is an increased possibility of the season being extremely active, with 19-25 named storms, including 7-11 hurricanes and 3-6 major hurricanes (category 3 and above).

This is because of conducive atmospheric and oceanic conditions in the part of the Atlantic where tropical storms develop, such as well above average sea surface temperatures,  weaker trade winds, weaker windshear and a strong west African monsoon.

Emergency preparations and management are being complicated by the COVID-19 pandemic.

The situation in the Gulf coast area stands in contrast to the raging wildfires in the West coast which have destroyed more than 1 million acres (more than 400,000 hectares) and claimed a number of lives. The US National Weather Service is warning of the risk of more dry thunderstorms which bring little rain but pose an additional fire threat.