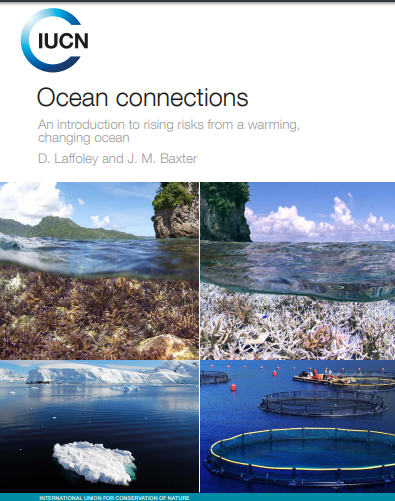 A new report by the International Union for Conservation of Nature (IUCN), commissioned by the global (re)insurance company XL Catlin, is warning of unprecedented changes occurring in the ocean and points to the pressing need for a multi-sectoral approach.

The report, Ocean connections: An introduction to rising risks from a warming, changing ocean, is calling for businesses, government and the insurance industry to work together to address their potential impacts.

The report examines the impacts of rising ocean temperatures and other stressors such as ocean acidification – the decrease in pH of the ocean – and deoxygenation – a reduction in the amount of oxygen dissolved in the ocean – on the marine environment and human life, and their potential consequences for society.

“The changing chemistry and physics of the ocean as a result of climate change can have devastating consequences for human life, health and livelihoods, the scale of which we are only beginning to realise.”

“The insurance industry can play a significant role in helping businesses, governments and communities mitigate damages and better adapt to these changes. Insurance against the loss of ecosystems can provide the much needed protection for people dependent on them for their livelihoods, while encouraging their sustainable management.”

Building on the IUCN report, a separate report by Dr. Falk Niehörster, Director of Climate Risk Innovations, the Ocean Risk and the Insurance Industry report assesses how the global insurance sector can equip itself for far-reaching impacts caused by the changing ocean, including new modelling systems to account for multiple and inter-connected risks. The report proposes ways in which the insurance industry can help incentivise greater mitigation strategies to help prevent worst-case scenarios.

Both reports were released as the first-ever Ocean Risk Summit is underway in Bermuda and whose founding partners include XL Catlin and IUCN.

“The summit will focus on the tremendous potential impacts of ocean change to society and our way of life,” said Charles Cooper, Chief Executive of Reinsurance at XL Catlin. “Ocean risk is among the biggest challenges we face, but with the right approach, we can incentivise positive change, to protect our planet now and into the future.”

According to the IUCN report, ocean warming will affect global food security as a result of changes in fishery yields and the distribution of fish stocks. Damages to property and the displacement of people are expected to rise as a result of sea-level rise and frequent extreme weather events such as storms and floods. The health of marine species and humans will be affected by increasing bacteria and virus outbreaks as pathogens spread more easily due to the warming waters, while travel and tourism will be impacted by frequent coral bleaching events.

The IUCN report notes that although there is no comprehensive analysis of the costs to society from ocean warming and other ocean stressors, growing evidence suggests that these costs will be significant. For instance, the 2016 algal blooms and aquaculture fish kills in Chile due to a strong El Niño pattern resulted in potential losses of up to USD 800 million.

Recently, the World Meteorological Organization (WMO) confirmed that 2017 was the most expensive year in history in terms of losses from weather and climate-related events, costing the global economy an estimated USD 320 billion.

The Ocean Risk Summit, which is taking place from May 8th to 10th 2018, brings together scientists, high level representatives of governments, the finance and the (re)insurance sectors to consider specific risks posed by changes in the ocean as a result of climate change and other man-made impacts such as pollution and overfishing.

Speakers at the summit include IUCN Patrons of Nature HSH Prince Albert II of Monaco and HM Queen Noor Al Hussein of Jordan, and Founder of the Virgin Group, Richard Branson.

Other ocean-related risks to be considered at the summit include the geopolitical and economic impacts of Arctic sea ice loss, threats to regional food security from overfishing and pollution, as well as the human cost of the spread of tropical diseases from water borne viruses.

The summit will provide expert data and analysis to help businesses and governments identify their potential exposure to these and other ocean risks. For information visit www.OceanRiskSummit.com

In 2017 XL Catlin launched its Ocean Risk Initiative to help identify solutions and build resilience at local, regional and global levels to the implications of ocean-related risk.