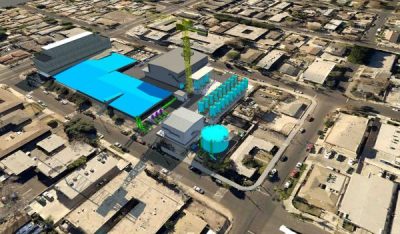 The Los Angeles Department of Water and Power (LADWP) is one step closer to remediating and restoring the beneficial use of the San Fernando Valley Groundwater Basin (SFB), providing a critical, local source of clean drinking water for the Los Angeles region.

The Kiewit-Stantec design-build team recently completed its “basis of design report,” which outlines treatment technology that will be used to treat contaminated groundwater as well as provide the basis for the treatment facility layout at LADWP’s North Hollywood Central and Tujunga remediation sites.

The SFB covers 226 square miles and is northwest of downtown Los Angeles on the north side of the Hollywood Hills. However, the basin is one of the largest contaminated groundwater areas in the United States. The $400-million projects by Kiewit-Stantec will remove existing industrial contaminants that date back to the 1940s in the SFB.

At the same time, the systems will allow LADWP to treat contaminated groundwater in the vicinity of the North Hollywood Central and Tujunga pump stations, providing up to 200 and 100 cubic feet of water per second, respectively.

The remediation of the SFB advances two key goals of Los Angeles Mayor Eric Garcetti’s Green New Deal— significantly reducing the purchase of imported water by 2025 and producing 71% of LA’s water supply locally by 2035. Once fully restored, the SFB will be an aquifer that can provide drinking water to more than 800,000 Angelenos.

Venu Kolli, Stantec senior principal and Water area manager based in Pasadena said the City had “great water resources underground” and the work was an important step toward delivering a greater supply of local water to Los Angeles and its residents and reducing its dependence on imported water.

When completed, the projects, which are scheduled to be operational by mid-2022, will treat and deliver up to 75 million gallons of water per day.