Low-cost wearable sensors for plants measure water use in crops 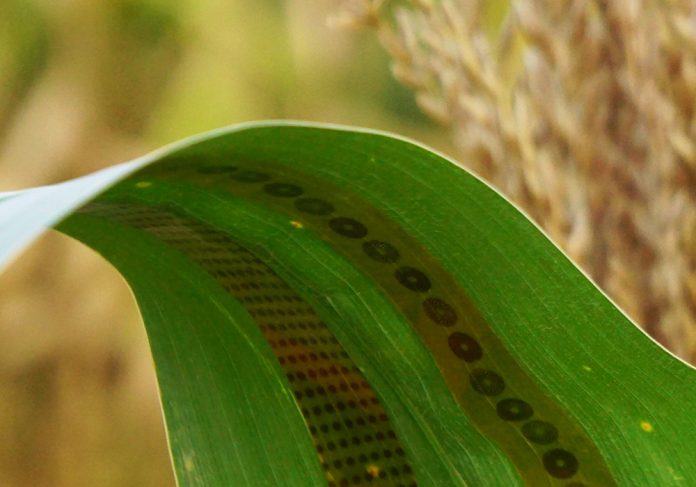 Iowa State University researchers in the USA have developed “plant tattoo sensors” to take real-time, direct measurements of water use in crops.

The new, low-cost, easily produced, graphene-based, sensors-on-tape can be attached to plants and can provide new kinds of data to researchers and farmers.

The tool making the water measurements possible is a tiny graphene sensor that can be taped to plants –described by the  researchers as a “plant tattoo sensor.” The graphene-on-tape technology in the study has also been used to produce wearable strain and pressure sensors, including sensors built into a “smart glove” that measures hand movements.

Plant scientist Patrick Schnable described how he measured the time it takes for two kinds of corn plants to move water from their roots, to their lower leaves and then to their upper leaves.

“With a tool like this, we can begin to breed plants that are more efficient in using water,”  Schnable said. “That’s exciting. We couldn’t do this before. But, once we can measure something, we can begin to understand it.”

The researchers describe the various sensors and the “simple and versatile method for patterning and transferring graphene-based nanomaterials” to create the flexible sensors in a paper featured in the journal Advanced Materials Technologies. The researchers have developed a process for fabricating intricate graphene patterns on tape

The process can produce precise patterns as small as 5 millionths of a meter wide – just a twentieth of the diameter of the average human hair. Making the patterns so small increases the sensitivity of the sensors.

Liang Dong, an Iowa State associate professor of electrical and computer engineering, and lead author of the paper and developer of the technology, commented:

“We’re trying to make sensors that are cheaper and still high performing.”

“This fabrication process is very simple. You just use tape to manufacture these sensors. The cost is just cents.”

The sensors are made with graphene oxide, a material very sensitive to water vapour. The presence of water vapour changes the conductivity of the material, and that can be quantified to accurately measure transpiration (the release of water vapour) from a leaf.

The plant sensors have been successfully tested in lab and pilot field experiments, Dong said.

A new three-year, $472,363 grant from the U.S. Department of Agriculture’s Agriculture and Food Research Initiative will support more field testing of water transport in corn plants.

The Iowa State University Research Foundation has applied for a patent on the sensor technology. The research foundation has also granted an option to commercialize the technology to EnGeniousAg – an Ames startup company whose co-founders include Dong and Schnable

“The most exciting application of the tape-based sensors we’ve tested so far is the plant sensor,” Dong continued. “The concept of wearable electronic sensors for plants is brand new. And the plant sensors are so tiny they can detect transpiration from plants, but they won’t affect plant growth or crop production.”