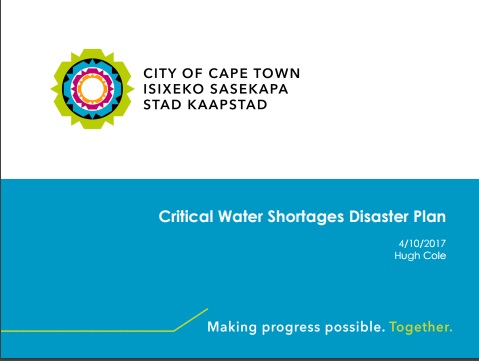 The City of Cape Town is facing acute water shortages and has activated the first Phase of the City’s Critical Water Shortages Disaster Plan.

Due to the impacts of climate change and reduced annual average rainfall in the past winter, the City has adopted a scenario called the New Normal where it is no longer only relying on rain water to fill dams for water supplies.

Announcing the measures being put in place at a briefing this week, the City’s Executive Mayor, Patricia de Lille said:

“The New Normal means that as a permanent drought region, we have to change our relationship with water as a scarce resource and augment our supply with alternative non-surface sources.”

The water stored in the dams currently stands at are at 37.8% with 27. 6% useable water.  The Mayor said that combined with other demand management measures which are under way, Cape Town could stretch out the number of days of water left in the dams to beyond March 2018.

However, she warned that if consumption is not reduced to the required levels of 500 million litres of collective usage per day, the supply of municipal water would not be available from about March 2018.

The City is targetting excessive water users with a mass roll-out of the installation of water management devices, which are being set at 350 litres per day per property.

In terms of the Water Resilience Plan to augment supply with new schemes, the first water is expected to come online by approximately December 2017/January 2018.

Additional water groundwater extraction at the Atlantis and Silverstroom aquifers is expected from about January/February 2018 onwards. The City has already managed to increase the production capacity from the Atlantis aquifer as part of its Water Resilience Plan and is continually looking at optimising operations in other areas.

Additional water through water reuse from the Zandvliet Wastewater Treatment Plant will come online from January/February 2018.

The serious and ongoing drought crisis has seen private sector interest in water supply tenders soar – more than 1600 interested parties have already downloaded the tender specifications of the first of its multiple water augmentation Requests for Proposals (RFPs).

The City plan to avoid acute water shortages comprises three phases. Phase 1 has been activated with water rationing through extreme pressure reduction (throttling). n order to avoid disaster and build up reserves, Cape Town has been reducing pressure over the months and this has been intensified. This is now set to increase further to force consumption down.

Under Phase 2  – a disaster stage – only a certain portion of the system would be kept alive close enough to water collection points where residents would be able to collect a predefined quantity of drinking water per person per day.

Strategic commercial areas, high-density areas with significant risk of increased burden of disease and fires (such as the majority of informal settlements), and critical services (such as hospitals), where possible, would continue to receive drinking water through normal channels.

The City’s law enforcement and policing resources, as well as other intergovernmental partners, such as the South African Police Service (SAPS) and the South African National Defence Force (SANDF), would be deployed to ensure that general safety is maintained throughout the city in this phase.

Phase 3 is the extreme disaster phase at which point the City would be incapable of drawing water from its surface dams in the Western Cape Water Supply System. There would only be a limited period in which the City could continue to supply water before complete water system failure.

“I must emphasise that the disaster and extreme disaster phases (2 and 3) can be avoided with progressive savings and rationing in Phase 1. This extreme can only be avoided if we all do what we need to do now to save water.”