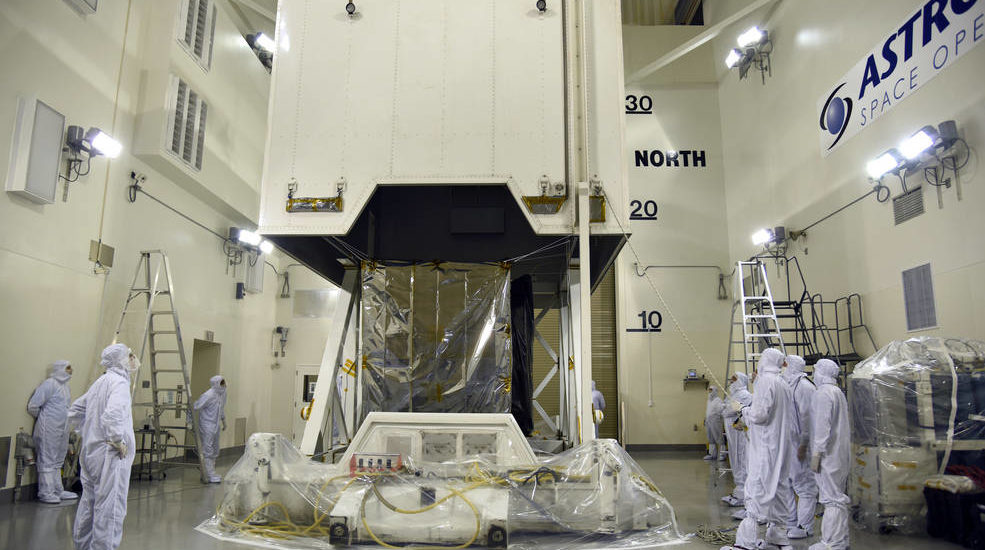 NASA is getting to ready to launch the most advanced laser instrument of its kind into space next month beginning a mission to measure – in unprecedented detail – changes in the heights of Earth’s polar ice.

NASA’s Ice, Cloud and land Elevation Satellite-2 (ICESat-2) will measure the average annual elevation change of land ice covering Greenland and Antarctica to within the width of a pencil, capturing 60,000 measurements every second.

Hundreds of billions of tons of polar ice melt or flow into the oceans annually, contributing to sea level rise worldwide. In recent years, contributions of melt from the polar ice sheets of Greenland and Antarctica alone have raised global sea level by more than a millimeter a year, accounting for approximately one-third of observed sea level rise, and the rate is increasing.

ICESat-2 data documenting the ongoing height change of ice sheets will help researchers narrow the range of uncertainty in forecasts of future sea level rise and connect the changes to climate drivers.

ICESat-2 also will make the most precise polar-wide measurements to date of sea ice freeboard – the height of sea ice above the adjacent sea surface. The measurement is used to determine the thickness and volume of sea ice. Satellites routinely measure the area covered by sea ice and have observed an Arctic sea ice area decline of about 40 percent since 1980, but precise, region-wide sea ice thickness measurements will improve the understanding of the drivers of sea ice retreat and loss.

Although floating sea ice doesn’t change sea level when it melts, its loss has different consequences. The bright Arctic ice cap reflects the Sun’s heat back into space – when that ice melts away, the dark water below absorbs that heat. This alters wind and ocean circulation patterns, potentially affecting Earth’s global weather and climate.

Beyond the poles, ICESat-2 will measure the height of ocean and land surfaces, including forests. ATLAS is designed to measure both the tops of trees and the ground below, which – combined with existing datasets on forest extent – will help researchers estimate the amount of carbon stored in the world’s forests. Researchers also will investigate the height data collected on ocean waves, reservoir levels, and urban areas. 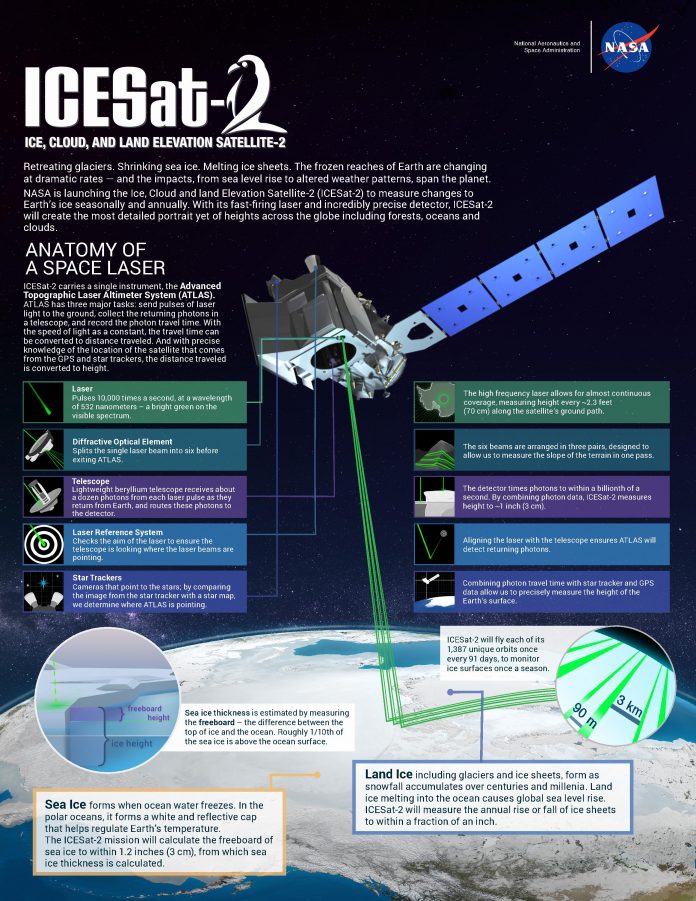 “The new observational technologies of ICESat-2 – a top recommendation of the scientific community in NASA’s first Earth science decadal survey – will advance our knowledge of how the ice sheets of Greenland and Antarctica contribute to sea level rise.”

ICESat-2 will extend and improve upon NASA’s 15-year record of monitoring the change in polar ice heights, which started in 2003 with the first ICESat mission and continued in 2009 with NASA’s Operation IceBridge, an airborne research campaign that kept track of the accelerating rate of change.

ICESat-2’s Advanced Topographic Laser Altimeter System (ATLAS) measures height by timing how long it takes individual light photons to travel from the spacecraft to Earth and back.

ATLAS will fire 10,000 times each second, sending hundreds of trillions of photons to the ground in six beams of green light. The roundtrip of individual laser photons from ICESat-2 to Earth’s surface and back is timed to the billionth of a second to precisely measure elevation.

With so many photons returning from multiple beams, ICESat-2 will get a much more detailed view of the ice surface than its predecessor, ICESat.

As it circles Earth from pole to pole, ICESat-2 will measure ice heights along the same path in the polar regions four times a year, providing seasonal and annual monitoring of polar ice elevation changes.

ICESat-2 is scheduled to launch Sept. 15 from Vandenberg Air Force Base in California.