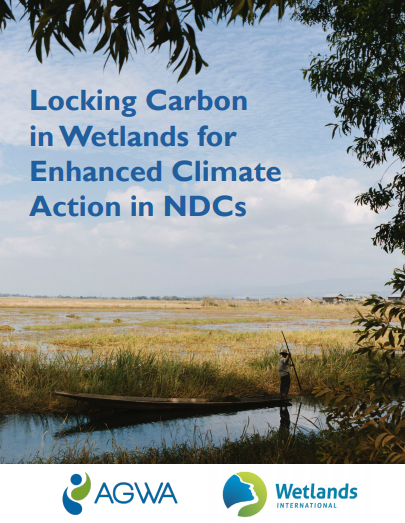 A new report by the Alliance for Global Water Adaptation and Wetlands International demonstrates the value of wetlands as a way to achieve climate mitigation targets, while unlocking biodiversity and adaptation benefits.

The report – Locking Carbon in Wetlands: Enhancing Climate Action by Including Wetlands in NDCs – is written for policymakers and national climate planners and shares the science behind the integral role of wetlands  within the global carbon cycle.

Wetlands are facing the most rapid decline of all ecosystems. At the same time, they offer vast and largely untapped carbon storage potential.

However, despite this, wetlands have not featured prominently within early climate commitments. With wetlands found in nearly every country, the report demonstrates how countries can tap into the undervalued potential of their own wetland ecosystems.

To translate science into practical and measurable action, the report includes a series of policy recommendations for national climate planners and Parties to the United Nations Framework Convention on Climate Change (UNFCCC).

The recommendations provide guidance around analysis of costs and benefits, measurement, reporting, and verification (MRV) frameworks, and prioritisation of key actions including wetland conservation, restoration, and wise use.

“Slowing the rate of climate change is arguably the most important action we as a species need to pursue now, today. But in our focus on tailpipes, smokestacks, and forests, we’ve missed one of our most important levers: how wetlands trap and store carbon. Paleoclimate records show that wetlands can be an accelerator or brake pedal for climate change.

“With this guide, we show how decision makers and resource managers can slam on the carbon brakes globally — removing carbon from the atmosphere while storing that carbon from future circulation. At the same time, we will be securing these wetlands for all of our adaptation needs, today and into the future.”

“The world is currently headed for 3˚C global warming and is already faced with continuous disasters. To close the emissions gap, land use has to change dramatically. That means changing how we store, manage and allocate water.

“Wetlands, from source to sea, are the premier land-based water and carbon stores. And safeguarding and restoring wetlands, including river floodplains, marshes, peatlands, deltas and coastal ecosystems like mangroves, is essential to slow climate change and enable adaptation.

“The science and technical know-how for this is well established. Organisations are ready to support planning and implementation. We urge countries to include wetlands as a focus in their NDCs and reap the reward of a ‘triple-win’: reduced carbon emissions, avoided future emissions and resilient, biodiverse land and water systems. All of this is needed as a basis for a healthy, prosperous society.”

The report received support from the Sector Programme for Sustainable Water Policy of Deutsche Gesellschaftfür Internationale Zusammenarbeit (GIZ) on behalf of the Federal Ministry for Economic Cooperation and Development (BMZ) of the Federal Republic of Germany.

“Raising climate ambitions will be essential for the 2020 NDC updates and for the years that follow. Making extensive use of the vast mitigation potential offered by wetlands and other freshwater ecosystems can be a low hanging fruit for enhancing climate action through water. At the same time, wetland conservation and restoration efforts can create various co-benefits beyond climate change, for instance in the field of water security, biodiversity and sustainable development. Eventually, all these benefits render wetlands one of the most precious types of ecosystems on our planet.”