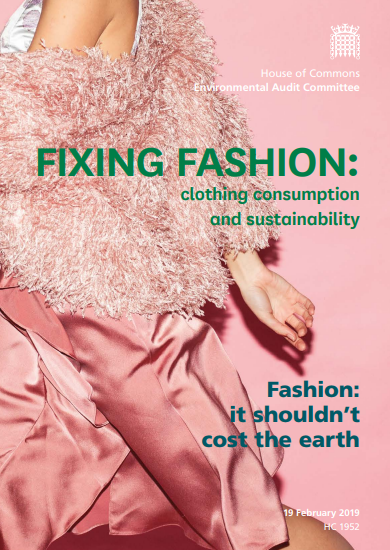 A new report is warning that the global fashion industry is depleting the world’s water resources, polluting rivers and other surface waters with chemicals and adding to ocean microplastic pollution.

The  report by the House of Commons Environmental Audit Committee in the UK Parliament says the industry is consuming and polluting huge volumes of water, with fashion items bought in the UK and sourced overseas causing significant environmental and social damage far beyond its shores.

In 2016, resource efficiency organisation WRAP estimated that the water footprint of clothes used in the UK alone was 8 billion cubic metres. Globally, the fashion industry consumes an estimated 79 billion cubic metres of fresh water annually. The growing and production of fibres consumes the greatest quantity of water.

“We are unwittingly wearing the fresh water supply of central Asia and destroying fragile ecosystems. The Government should facilitate collaboration between fashion retailers, water companies and washing machine manufacturers and take a lead on solving the problem of microfibre pollution. Ultimate responsibility for stopping this pollution, however, must lie with the companies making the products that are shedding the fibres.”

According to the report, most clothes sold in the UK are produced in Asian countries with low labour costs and weak environmental governance. Recently there has been a growth in garment manufacturing in UK as brands and retailers seek to respond faster to consumer demand.

The Aral Sea, formerly one of the four largest lakes in the world, has almost entirely dried up, in large part due to intensive industrial cotton farming in Central Asia.

Major cotton producing countries such as China and India are already suffering from medium to high levels of water stress in certain areas. An independent report published by the Global Fashion Agenda in collaboration with the Boston Consulting Group The Pulse of Fashion warns that as water scarcity worsens in the future some cotton growing nations ‘may face the dilemma of choosing between cotton production and securing clean drinking water’.

The report concludes that although some parts of the fashion industry are making progress in reducing their carbon and water consumption, the improvements have been outweighed by the increased volumes of clothing being sold.

The EAC has set out a number of key recommendations for the UK Government, including:

The report is calling for Governments to oblige retailers to ensure full traceability in their supply chains to prove decent livelihoods and sustainably sourced materials.

The Committee has recommended that the Government works with industry to trace the source of raw material in garments to tackle social and environmental abuses in their supply chains, commenting:

“Digital technology is widely used in other supply chains. We do not understand why a modern high-tech industry like fashion does not have these systems already in place. Some companies told us they can trace their materials down to Tier 4 suppliers.”

“ This begs the question – if one can do it, why can’t all? This first step is essential if fashion is to tackle its waste, water, chemical and carbon footprint. This also reduces the opportunities for sub-contractors to take their cut along the supply chain.”

Textile production is responsible for high volumes of water containing hazardous chemicals being discharged into rivers and water courses. Twenty per cent of industrial water pollution globally is attributable to the dyeing and treatment of textiles, according to the Ellen MacArthur Foundation.

Most clothes sold in the UK are produced in Asian countries with low labour costs and weak environmental governance. Recently there has been a growth in garment manufacturing in UK as brands and retailers seek to respond faster to consumer demand.

“Fashion shouldn’t cost the earth. Our insatiable appetite for clothes comes with a huge social and environmental price tag: carbon emissions, water use, chemical and plastic pollution are all destroying our environment.

“In the UK we buy more clothes per person than any other country in Europe. ‘Fast fashion’ means we overconsume and under use clothes. As a result, we get rid of over a million tonnes of clothes, with £140m worth going to landfill, every year.

“Fashion retailers must take responsibility for the clothes they produce. That means asking producers to consider and pay for the end of life process for their products through a new Extended Producer Responsibility (EPR) scheme.

“The Government must act to end the era of throwaway fashion by incentivising companies that offer sustainable designs and repair services. Children should be taught the joy of making and mending clothes in school as an antidote to anxiety and the mental health crisis in teenagers. Consumers must play their part by buying less, mending, renting and sharing more.”