A new study says that global vulnerability to sea level rise is worse than previously understood and that  150 million people could find themselves living on land permanently below the high tide mark by 2050.

The researchers also warn that rising sea levels could push chronic floods higher than land currently home to 300 million people within three decades, as a result of climate change.

The new figures are the result of an improved global elevation dataset produced by Climate Central using machine learning, and revealing that coastal elevations are significantly lower than previously understood across wide areas

The threat is concentrated in coastal Asia and could have profound economic and political consequences within the lifetimes of people alive today.

The findings are documented in a new peer-reviewed paper in the journal Nature Communications.

Over the course of the twenty-first century, global sea levels are projected to rise between about 2 and 7 feet, and possibly more. The key variables will be how much heat-trapping pollution from human activities is released into the atmosphere and how quickly the land-based ice sheets in Greenland and especially Antarctica destabilize.

Projecting where and when that rise could translate into increased flooding and permanent inundation is profoundly important for coastal planning and for reckoning the costs of humanity’s emissions.

A new digital elevation model produced by Climate Central, CoastalDEM, shows that many of the world’s coastlines are far lower than has been generally known and that sea level rise could affect hundreds of millions of more people in the coming decades than previously understood. 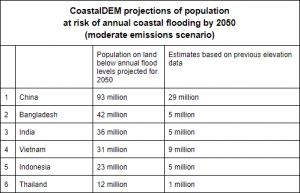 Based on sea level projections for 2050, land currently home to 300 million people will fall below the elevation of an average annual coastal flood. By 2100, land now home to 200 million people could sit permanently below the high tide line.

The researchers say that adaptive measures such as construction of levees and other defences or relocation to higher ground could lessen these threats. However, despite these defences, increasing ocean flooding, permanent submergence, and coastal defence costs are likely to deliver “profound humanitarian, economic, and political consequences.”

Developed using machine learning working with more than 51 million data samples (see methodology), the new CoastalDEM dataset is substantially more accurate than SRTM, particularly in densely populated areas—precisely those places where the most people and structures are threatened by rising seas.

In low-elevation coastal areas in the United States with population densities over 50,000 people per square mile, such as parts of Boston, Miami, and New York City, SRTM overestimates elevation by 15.5 feet on average. CoastalDEM cuts the average error to less than 2.5 inches.

Combining CoastalDEM with sea-level-rise and coastal-flood models produces new estimates of exposure to rising seas around the world.The estimates reveal that far more land—and more people—will be vulnerable to sea level rise during this century than previously believed.

In the coming decades, the greatest effects will be felt in Asia, thanks to the number of people living in the continent’s low-lying coastal areas. Mainland China, Bangladesh, India, Vietnam, Indonesia, and Thailand are home to the most people on land projected to be below average annual coastal flood levels by 2050. Together, those six nations account for roughly 75 percent of the 300 million people on land facing the same vulnerability at midcentury.

As sea levels continue to rise throughout the century, chronic flooding will spread and more land will be permanently lost to the ocean. By 2100, CoastalDEM’s elevation data show, land currently home to 200 million people could fall permanently below the high tide line.

The bad news is again concentrated in Asia. China, Bangladesh, India, Vietnam, Indonesia, and Thailand are home to the greatest number of people who today live on land that could be threatened by permanent inundation by 2100—151 million in total, and 43 million in China alone.

Danger of permanent inundation not  limited to Asia

However, the danger of permanent inundation is by no means be limited to Asia. In 19 countries, from Nigeria and Brazil to Egypt and the United Kingdom, land now home to at least one million people could fall permanently below the high tide line at the end of the century and become permanently inundated, in the absence of coastal defenses.

Under a higher-emissions scenario, and near the tail end (95th percentile) of sea-level rise sensitivity to warming for the model used in this study, land home to 640 million people today—approaching 10 percent of the world’s population—could be threatened by the end of the century, either by chronic flooding or permanent inundation.

Economic, humanitarian and political costs will be steep

Projecting the specific economic, humanitarian, and political costs of the upward revision in global exposure to sea level rise revealed by CoastalDEM is beyond the scope of this report. But the evidence suggests that those costs will be steep. In the decades ahead, sea level rise could disrupt economies and trigger humanitarian crises around the world.

Estimates of future economic losses from sea level rise vary depending on the amount of climate pollution and subsequent rise projected, as well as other factors, such as whether future population growth, innovation, or migration are considered.

Some projections indicate that flooding could cause tens of trillions of dollars in losses each year by the end of the century—or trillions per year, if extensive adaptation measures are implemented.

In practice, the costs will run deeper than immediate physical damage to buildings and infrastructure, or the costs of adaptation, which will never be perfect. Flooding can also be costly because it can displace productive local economies dependent on density and convenient coastal locations. It could also disrupt global supply chains by limiting access to ports and coastal transportation.

Sea level rise could also produce humanitarian crises by stripping millions of people of their homes and traditional livelihoods.

In states around the world, mass displacement could shape national politics. According to the report’s authors, the recent migration that has figured so prominently in recent European elections pales in comparison to the potential displacements of the coming decades, when many millions of people could flee rising seas around the world—both across borders, and within them. Drought, extreme heat, and the other dangers of climate change could displace many more.

Deep, immediate cuts to global emissions would modestly reduce the danger posed by rising seas this century. Such cuts would reduce the total number of people threatened by annual flooding and permanent inundation at the end of the century by 20 million, relative to moderate emissions cuts made roughly in line with the Paris agreement.

Notably, the benefits of deep emissions cuts would reach far beyond sea level rise, reducing the danger posed by climate change’s many other risks. If governments seek to limit future impacts from ocean flooding, they could also avoid new construction in areas at high risk of inundation, while protecting, relocating, or abandoning existing infrastructure and settlements.

The researchers conclude that sea level rise is a near term danger: today’s communities must make choices not just on the behalf of future generations, but also for themselves.