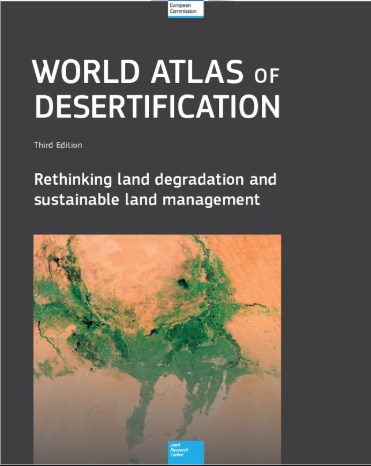 The new edition of the World Atlas of Desertification published today by the Joint Research Centre, the European Commission’s science and knowledge service, shows unprecedented pressure is being placed on the planet’s natural resources as a result of population growth and changes in consumption patterns.

The Atlas, which provides a tool for decision makers to improve local responses to soil loss and land degradation and the first comprehensive, evidence-based assessment of land degradation at a global level, highlights the urgency to adopt corrective measures.

“Over the past twenty years, since the publication of the last edition of the World Atlas of Desertification, pressures on land and soil have increased dramatically. To preserve our planet for future generations, we urgently need to change the way we treat these precious resources. This new and much more advanced edition of the Atlas gives policymakers worldwide comprehensive and easily accessible insights into land degradation, its causes and potential remedies to tackle desertification and restoring degraded land.”

“The World Atlas on Desertification will help us understand the growing problem of desertification and land degradation, and how we can address the issue. The Atlas shows an EU increasingly affected by desertification, underlining the importance of action on soil protection and sustainable land and water use in policy areas such as agriculture, forestry energy and climate change. That’s the approach recommended in the EU Soil Thematic Strategy, and it’s our best hope of achieving land degradation neutrality in line with the 2030 Sustainable Development Goals.”

The Atlas provides examples of how human activity is driving species to extinction, threatening food security, intensifying climate change and leading to people being displaced from their homes.

The main findings show that population growth and changes in our consumption patterns put unprecedented pressure on the planet’s natural resources:

Over 75% of the Earth’s land area is already degraded, and over 90% could become degraded by 2050.
Globally, a total area half of the size of the European Union (4.18 million km²) is degraded annually, with Africa and Asia being the most affected.
The economic cost of soil degradation for the EU is estimated to be in the order of tens of billions of euros annually.
Land degradation and climate change are estimated to lead to a reduction of global crop yields by about 10% by 2050. Most of this will occur in India, China and sub-Saharan Africa, where land degradation could halve crop production.
As a consequence of accelerated deforestation it will become more difficult to mitigate the effects of climate change
By 2050, up to 700 million people are estimated to have been displaced due to issues linked to scarce land resources. The figure could reach up to 10 billion by the end of this century.

While land degradation is a global problem, it takes place locally and requires local solutions. Greater commitment and more effective cooperation at the local level are necessary to stop land degradation and loss of biodiversity.

Further agricultural expansion, one of the main causes of land degradation, could be limited by increasing yields on existing farmland, shifting to plant-based diets, consuming animal proteins from sustainable sources and reducing food loss and waste.

The Atlas gives a clear overview of the underlying causes of degradation worldwide. It also contains a large number of facts, forecasts and global datasets that can be used to identify important biophysical and socio-economic processes that, on their own or combined, can lead to unsustainable land use and land degradation.

World leaders have committed to combat desertification and restore degraded land and soil, including land affected by desertification, drought and floods

Under the United Nations’ Sustainable Development Agenda, world leaders have committed to “combat desertification, restore degraded land and soil, including land affected by desertification, drought and floods, and strive to achieve a land degradation-neutral world” by 2030.