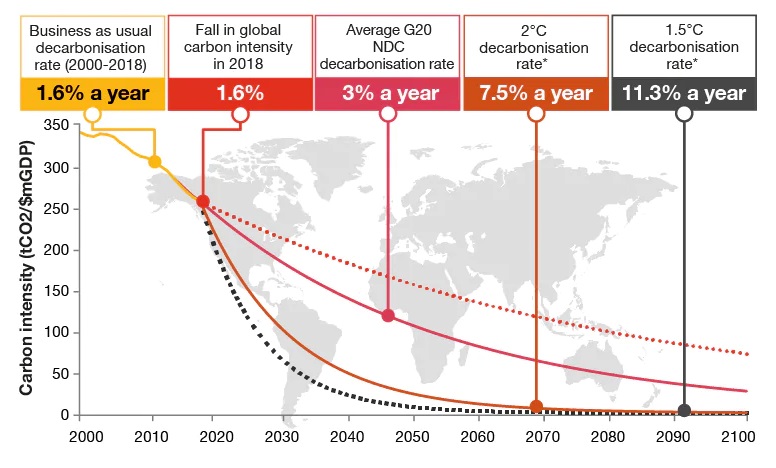 Graph: Low Carbon Economy Index 2019
Global consulting group PwC is warning that progress on climate appears to have stalled and that the Paris Agreement goal is slipping further out of reach.

When PwC first published the LCEI in 2009, the 2°C decarbonisation rate was a more achievable 3-4% per year.

After four years of moderate progress, in 2018 the pace of the low carbon transition slowed down to the long term average since 2000. Despite significant increases in renewable energy, the gap between the Paris Agreement goal and the current pathway continues to grow, PWC said.

“It’s worrying that progress on climate seems to have stalled. There’s a huge gap between the rhetoric of the ‘climate emergency’ and the reality of an inadequate global response. This is increasingly challenging for companies to manage, as they deal with both extreme weather impacts and growing climate policy risk. They are having to balance continued demand for business as usual and urgent calls for disruptive change.”

The findings show that global GDP grew by 3.7% in 2018 and energy consumption rose by 2.9% – driven by rapidly industrialising economies, with growth over 5% in China, India and Indonesia which are witnessing a resurgence in the growth of energy intensive industries such as construction and steel.

Fossil fuels use met most of this energy demand growth which increased global emissions by 2% – the fastest rise in emissions since 2011.And while renewable energy grew at the highest rate since 2010 at 7.2%, this still represents less than 12% of total energy.

According to the Index, the carbon intensity of the global economy fell by 1.6% in 2018, less than half of the decarbonisation rate witnessed in 2015 (of 3.3%) when over 190 governments committed to the Paris Agreement. A decarbonisation rate of 7.5% per year is now required to give a two thirds probability of limiting warming to two degrees.

“At this rate countries won’t even achieve their own national targets (NDCs) let alone the much more ambitious global goal in that Agreement. We estimate that the average decarbonisation rate needed to meet the NDCs for the G20 economies is 3% per year to 2030,” PwC said.

“Businesses are now having to deal with increasing intensity of climate impacts and extreme weather events, alongside an incoherent policy response around the world.”

LCEI 2019 is also highlighting that the extreme heat and cold weather patterns seen globally last year led to a growth in demand for electricity and gas for heating and cooling, describing it as “a stark warning of the potential feedback loops associated with the impacts of climate change.”

The Index points out that currently there are more than 1.6 billion air conditioning units in use, which consume over 2,000 terawatt hours (TWh) of electricity each year. “As heating periods become more frequent, and global wealth increases the market for air conditioning units, particularly in China, India and Indonesia, it is anticipated that demand could reach 15,500TWh by 2050”, PwC concludes.

The LCEI 2019 findings show that coal, natural gas and oil accounted for over two thirds of the increase in energy demand, rising for the second year in a row. India recorded the most significant rise in coal consumption, increasing its use by 36.3 Mtoe (+8.7% increase) in 2018. This increase is equivalent to the coal consumption of the whole of Central and South America. Global consumption of natural gas also increased by 5.3% and makes up an increasing share of the global energy mix.

The lack of ambitious and more coordinated climate policies means that economics remains the dominant factor in determining energy mix and that low carbon alternatives are disadvantaged, PwC concludes.

“However unlike previous attempts, 2019 has marked a significant shift in profile and engagement in the issues. A number of countries, including the UK, France, Canada and Ireland, and other sub-national jurisdictions have declared a ‘climate emergency’ in their respective jurisdictions.”

PwC said the UN will seek to mobilise global leaders during this week’s summit in New York and expects many major economies to publish plans to enhance their targets by 2020. The consultancy will analyse the plans in the run up to COPs 25 and 26.