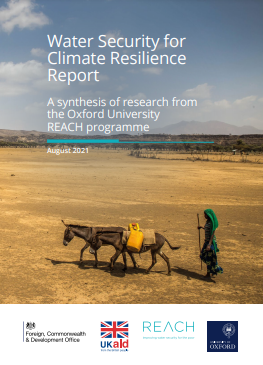 Urgent steps to improve water security are needed across the world as part of measures to increase climate resilience, the University of Oxford-led REACH research programme warned today as it published a new, interdisciplinary report.

It follows the recent, major warning from the World Health Organization (WHO) and UNICEF that the world is on course to miss United Nations Sustainable Development Goal 6 – clean water and sanitation for all by 2030. They say that billions are set to lack access to safe water at that point unless the rate of progress quadruples – a situation they describe as “alarming”.

The Water Security for Climate Resilience Report says that while the immediate impacts of droughts and floods rightly grab headlines, climate change is also impacting societies in more subtle and less visible ways – such as impacts on female empowerment and on education.

REACH is a nine-year global research programme to improve water security for 10 million poor people by 2024 by delivering world-class science that transforms policy and practice, led by the University of Oxford with an international consortium of partners. It is funded with UK Aid Direct from the UK Government’s Foreign, Commonwealth & Development Office.

The new report, led by Dr Katrina Charles, Associate Professor and Senior Research Fellow at the University of Oxford, and Co-director of REACH, provides an interdisciplinary synthesis of research on water and climate, and its effects on societies.

The report finds, for example, that the impacts of climate events are strongly gendered, and in a range of ways. During a climate event such as a flood, women, as well as children, and sick and elderly people, have the highest risk of death as they are most likely to be at home during the event.

However, climate impacts also operate at other levels. In Bangladesh, for example, women are more empowered in areas where water is abundant with acceptable quality and accessibility, and where water security interventions have minimised the impacts of climate hazards such as cyclonic storm surges or fluvio-tidal flooding. In areas beset with water insecurity, women’s empowerment is lower.

Children are also impacted in different ways. For example, during climate shocks, parents must decide how to protect their children, with education often being traded in favour of children’s physical health or household income generation.

Dr Katrina Charles, Associate Professor and Senior Research Fellow at the University of Oxford, and Co-director of REACH, said:

“Our research shows how climate change is likely to affect water supplies in different ways, in different places, and what that means for different people. It shows, for example, how heavy rainfall can lead to outbreaks of disease, how reductions in rainfall can concentrate pollutants that cause cancers, and how coastal flooding can turn aquifers salty.

“We also see how impacts on society fall more on some than others. Climate change can impact not just physical health directly, but also areas such as women’s empowerment and children’s education, especially in certain parts of the world.

“There is no doubt: local policies and local investments can make a crucial difference. It is vital that governments and others understand the importance of climate resilience measures that reflect particular geographies, and take action now. We are making progress, with UK government funding, and brilliant colleagues and supportive governments around the world, but there is so much more to be done.”

“As this report shows, we urgently need to increase the climate resilience of water systems in order to safeguard development gains, advance gender equality, and protect vulnerable communities from climate impacts.

“The UK’s COP26 Presidency is driving global action and cross-sector collaboration to build local, national and global resilience to climate impacts. We welcome this report’s findings and through the Adaptation Action Coalition, with international partners, we will continue to use research, evidence and expertise to achieve a climate resilient world by 2030.”