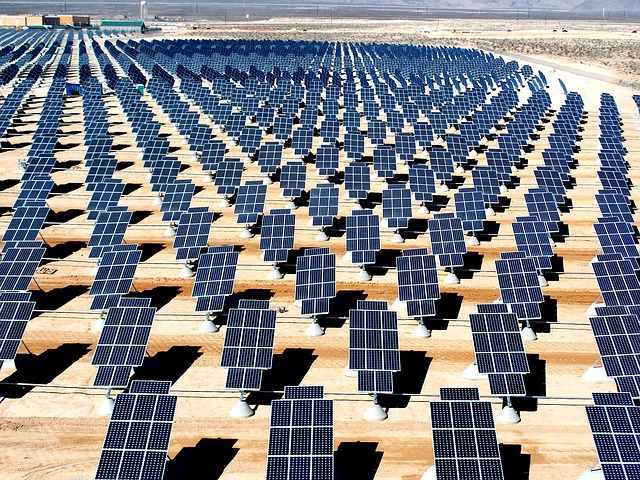 Dr Raed B’kayrat Managing Director of the Clean Energy Business Council discusses the latest developments in renewable energy deployment in the Arab Region and its key role in desalination. 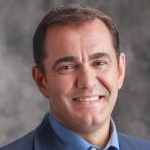 The Arab region, especially in Gulf countries, has been seeing wider adoption of renewable energy which is starting to impact the electrical power sector across the board.  Also, the water – energy nexus in the Arab region has been strongly influenced by the integration of renewable energy, which are inherently variable generation sources, as renewables drive forward the energy transition across the middle east region.

The main features to this transition which are influencing the water-energy nexus are: 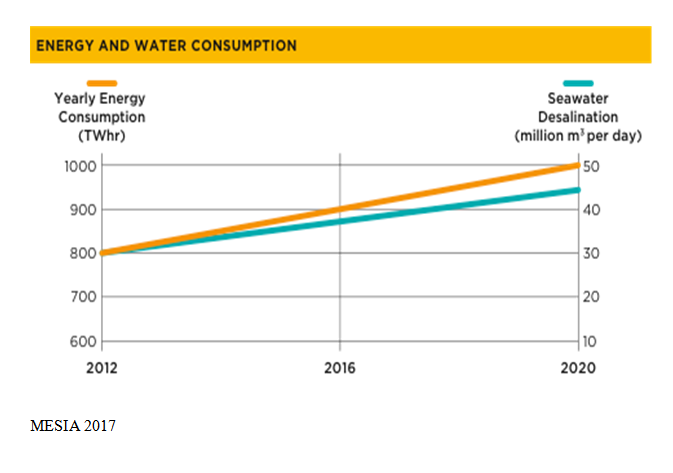 Water desalination is typically an energy intensive process and largely powered by fossil fuel sources. As a result, the CO2 emissions associated with water desalination are considerable: It is estimated that the currently installed and operational desalination plants worldwide emit around 76 million tonnes of CO2 per year (Masdar, 2015).

As access to potable water becomes an increasing issue for a quarter of humanity, there should be an increase of use of desalination to satisfy this basic dire need for survival of large parts of the population. With this trend, emissions are expected to grow at least to around 218 million tons of CO2per year in 2040 if no actions are undertaken (Source: GWI Desaldata / IDA, 2015)

As desalination is increasingly considered by governments and consumers around the world to address hydric stress and climate change resilience, public and private sector actors felt the urgency to bring together key stakeholders from the energy and desalination industries, water utilities, governments, financing institutions, academia and research & development (R&D) with the mission to reduce CO2 emissions from existing and planned water desalination plants in all world regions.

As a result, the Global Clean Water Desalination Alliance (GCWDA) was launched at COP21 in 2015.

The GCWDA has become a dynamic platform and saw a steady increase in the number of its members which has reached in 2018, 163 organizations from 40 countries and 6 continents representing leading public, private, research and civil society organizations.

At its inception, the GCWDA has adopted the following key targets:

1. between 2020 and 2025: ensure that 20% of newly built desalination plants are run on clean energy supply and energy efficient desalination processes;

Aside from adding renewables to the energy mix and considering decarbonzation of water treatment and desalination operations,  it’s important to consider the mostly untapped area of energy decarbonization, which is energy efficiency.

There, the Clean Energy Business Council or CEBC is a not-for-profit organization looking after bridging the gap between the private sector and public sector in the clean tech space.

CEBC has recently kicked off an Energy Efficiency working group with the mission to promote and support the demand-side energy efficiency market and optimize energy savings in public and private sector facilities in the MENA region, with the participation of around 15 ESCOs in the region.  The initiative has  overarching goals such as:

The working group driven by its industry members decided to focus on five main areas:

As we globally strive to reduce the massive burn rate or our allowance in climate warming emissions, which is expected to run out by around 2041 if we use the 2C rise as the threshold which we do not want to exceed for our planet earth, it is fair to say that the Arab region is making strong strides towards its role in decarbonizing its footprint in energy and water across the board with the GCC leading the pack in terms of project size and execution speed.

It should be noted that the path for decarbonization is still long and wide for the Arab region, with more work to be done on the regulatory, policy and business attraction side but concrete steps are being taken by governments which provides hope of success in the short and long term.

Dr. Raed B‘kayrat Managing Director of the Clean Energy Business Council, is a speaker at the upcoming Dubai Solar Show 2018 which takes place in Dubai 23rd-25th October alongside WETEX 2018.

Based in Masdar City in Abu Dhabi, the Clean Energy Business Council is the pre-eminent organisation representing the private sector involved in the clean energy sector across the MENA region.

WaterBriefingGlobal is media partner with Dubai Solar 2018 and WETEX 2018