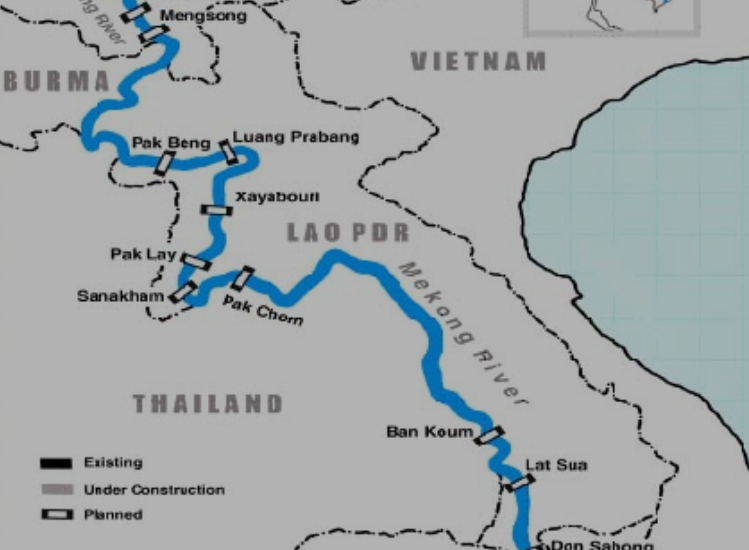 The Save the Mekong coalition is today calling for the Sanakham and other planned Mekong mainstream dams to be cancelled following the announcement on 11th May by the Mekong River Commission (MRC) that the proposed Sanakham MRC hydropower project in Laos will undergo the MRC’s Prior Consultation process.

Launching its call, the coalition is urging lower Mekong governments and the MRC to cancel the plans rather than proceeding with what it describes as “yet another flawed ‘consultation’ process”.

According to Save the Mekong, the proposed Sanakham dam – the sixth mainstream dam to be submitted for Prior Consultation – is “expensive, unnecessary and risky – and should be cancelled.”

The 684-megawatt (MW) dam would cost over $2 billion and take eight years to build. The coalition said that if averaged out over eight years, the Sanakham dam would be adding 90 MW a year, which pales in comparison to the installation of more sustainable energy options being rolled out in the region. For example, between April and July 2019, neighbouring Vietnam added 4,400 MW from solar,2 which is more than six times the installed capacity of the Sanakham dam.

The Coalition is warning that with the rapidly changing landscape in power sector technologies and investments, there is a risk that large hydropower projects like the Sankham dam, which take several years to build and require the majority of financing up-front, will become stranded assets.

In addition, the risks are compounded by climate change and existing hydropower projects upstream, which are making water flows and levels more unpredictable, which in turn will impact on the amount of electricity generated by Sanakham and other mainstream dams.

A statement issued by the coalition calling for the project to be cancelled says that the cost of the electricity generated by Sanakham dam is slated for export to Thailand. However, Thailand has a major over-supply of electricity, which has increased even more due to the economic fall-out from the COVID-19 pandemic.

The proposed Sanakham dam site is on the Mekong mainstream, about two kilometres upstream of the Thai-Lao border. However,  according to Save the Mekong, there has been “no serious consideration of – let alone meaningful consultations on – the project’s transboundary impacts.”

The coalition is urging lower Mekong governments and the MRC to:

The coalition wants outstanding concerns on the impacts of existing dams to be addressed, saying that dams already built on the Lancang-Mekong and its tributaries are having major and cumulative impacts on the environment and riparian communities, including across borders.

“Instead of proceeding with more mainstream dams under the guise of ‘sustainable hydropower’ and unproven mitigation measures, governments, developers and financiers must prioritise addressing the impacts of existing dams to improve the lives and well-being of affected communities.”

In addition, Save the Mekong points out that in March 2020, Cambodia announced that it would suspend the proposed Sambor and Stung Treng dams for at least 10 years, commenting:

“The region’s huge potential for energy efficiency and sustainable non-hydro renewables, coupled with the rapid advances in – and falling costs of – generation, transmission and storage technologies, can help realise energy access and security for people and economies of the region, without destroying the rivers and natural resources.”

Save the Mekong has repeatedly raised concerns over and pointed to what it describes as serious flaws in Prior Consultation processes, saying that

“…without substantial reform, there is little indication that a new Prior Consultation process … will be any different from past experience or that it will be able to ensure minimum standards of transparency and accountability, let alone meaningful participation for affected communities, civil society and the general public.”

Click here for more information about the Save the Mekong coalition