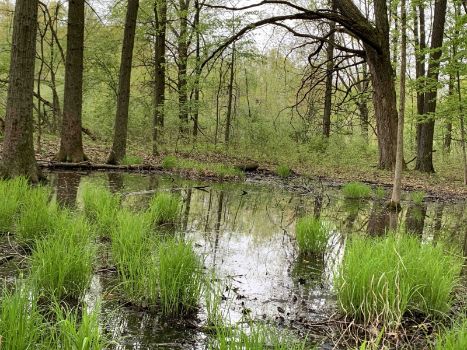 A new federal rule that determines how the Clean Water Act is implemented leaves millions of miles of streams and acres of wetlands unprotected based on selective interpretation of case law and a distortion of scientific evidence, according to researchers at The Ohio State University.

In a Policy Forum article published in the Aug. 14 issue of Science, the researchers assert that the Navigable Waters Protection Rule undermines the spirit – if not the letter – of the Clean Water Act by protecting only waters that have a permanent hydrologic surface connection to rivers, lakes and other large “navigable” bodies of water. Also omitted from consideration is maintaining the integrity of the biological and chemical quality of the nation’s waters, protections that are explicitly called for in the Clean Water Act.

“It’s so important to say, right out of the gates, that the new rule does not protect water in the way that the Clean Water Act was intended to protect water,” said lead author Ma�eika Sullivan, director of the Schiermeier Olentangy River Wetland Research Park at The Ohio State University.

The rule went into effect on June 22.

According to the study under the new rule stand-alone wetlands across the country whose collective area is approximately the size of the state of West Virginia are left unprotected.

Among the millions of miles of ephemeral streams – those that flow after precipitation events – losing federal protection are, for example, more than 95 percent of Arizona’s streams, including many tributaries that flow into the Grand Canyon.

The scientists say the change means that now-unprotected waters may be subjected to a variety of harmful human activities such as dredging or filling in waters for development, or even unpermitted dumping of industrial waste into streams or wetlands. Some potential results: higher risk for floods, loss of biodiversity, and threats to drinking water and recreational fishing.

“We’re talking about major roll-backs in protections that limit activities that impair, pollute and destroy these systems,” said Sullivan, also associate professor in Ohio State’s School of Environment and Natural Resources, who co-authored the article with colleagues specializing in aquatic science, conservation science and environmental law.

“And it comes at a time when we’re really starting to understand multiple stressors on water – not just urbanization or climate change or pollution, but how all these factors interact. And now we’re removing protections and potentially undermining decades of taxpayer investment in improving water quality.

“It’s a travesty, not just for us now, but for future generations. It could really be a watershed moment in that sense.”

Legal battles have been waged for years over which non-navigable U.S. waters should be protected under the Clean Water Act, and the U.S. Supreme Court weighed in with opinions in a 2006 case.

In 2015, the Obama administration implemented the Clean Water Rule, which classified all tributaries and most wetlands as “waters of the United States” that fall under federal jurisdiction.

At the heart of the rule was a Connectivity Report produced by the Environmental Protection Agency, backed by a review of more than 1,200 scientific publications and input from 49 technical experts.

The science supported protection for isolated or intermittent systems that, if polluted or destroyed, would decrease water quality downstream. Sullivan was a member of the EPA Scientific Advisory Board that confirmed the scientific underpinnings of the report and the rule.

The study says the language of the new Navigable Waters Protection Rule instead harkens back to Scalia’s 2006 opinion, protecting waters with “relatively permanent” surface flows and excluding from federal jurisdiction all groundwater and all ephemeral bodies of water, as well as others.

“So what’s extremely concerning from a policy standpoint is that the federal government is, at least in part, leaving science aside,” Sullivan said. “This idea of connectivity is one of the most crucial components of the science that has largely been ignored in this rule. There are magnitudes of connectivity – it could be frequency or how long it lasts. There are also different types of connectivity: biological, chemical and hydrologic.

“Further, just because a waterbody may be less connected to another doesn’t necessarily mean it’s less important for water quality.”

For human recreation and well-being, Sullivan said, small streams and wetlands are critical, both in their own right, as well as because they support larger, downstream ecosystems such as rivers, lakes and reservoirs.

Sullivan and colleagues cited an April 2020 Supreme Court decision that may influence outcomes of the more than 100 pending lawsuits filed in opposition to the new rule.

In County of Maui v. Hawaii Wildlife Fund, the court affirmed for the first time that pollutants that travel through groundwater and then emerge into surface waters are covered by the Clean Water Act.

Until the litigation is sorted out, the authors are urging mobilization of grassroots efforts among watershed councils, other agencies and academics to conserve and protect water – a tall order, Sullivan acknowledged, when it comes to staying coordinated and coming up with resources.