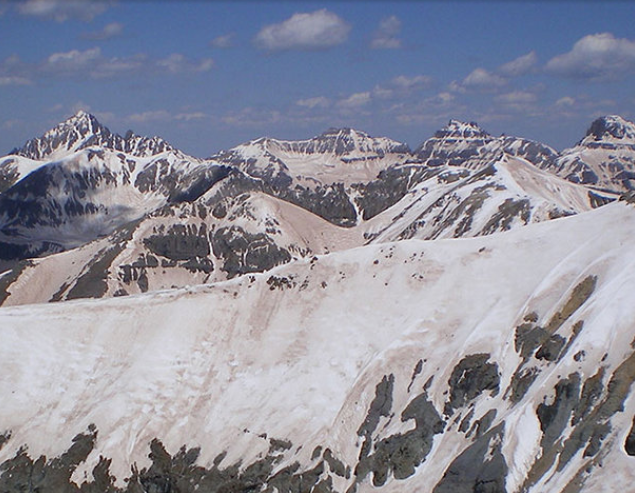 A new study from NASA’s Jet Propulsion Laboratory in Pasadena, California has found that dust, not spring warmth, controls the pace of spring snowmelt that feeds the headwaters of the Colorado River.

Contrary to conventional wisdom, the amount of dust on the mountain snowpack controls how fast the Colorado Basin’s rivers rise in the spring regardless of air temperature, with more dust correlated with faster spring runoff and higher peak flows.

The finding is valuable for western water managers and advances understanding of how freshwater resources, in the form of snow and ice, will respond to warming temperatures in the future.

When snow gets covered by a layer of windblown dust or soot, the dark topcoat increases the amount of heat the snow absorbs from sunlight. Tom Painter of NASA’s Jet Propulsion Laboratory in Pasadena, California, has been researching the consequences of dust on snowmelt worldwide. This is the first study to focus on which has a stronger influence on spring runoff: warmer air temperatures or a coating of dust on the snow.

Windblown dust has increased in the U.S. Southwest as a result of changing climate patterns and human land-use decisions. With rainfall decreasing and more disturbances of the land, protective crusts on soil are removed and more bare soil is exposed.

Winter and spring winds pick up the dusty soil and drop it on the Colorado Rockies to the northeast. Historical lake sediment analyses show there is currently an annual average of five to seven times more dust falling on the Rocky Mountain snowpack than there was before the mid-1800s.

Painter and his colleagues looked at data on air temperature and dust in a mountain basin in southwestern Colorado from 2005 to 2014, and streamflow from three major tributary rivers that carry snowmelt from these mountains to the Colorado River. The Colorado River’s basin spans about 246,000 square miles (637,000 square kilometers) in parts of seven western states.

The researchers found that the effects of dust dominated the pace of the spring runoff even in years with unusually warm spring air temperatures. Conversely, there was almost no statistical correlation between air temperature and the pace of runoff.

“We found that when it’s clean, the rise to the peak streamflow is slower, and generally you get a smaller peak.” Painter said. “When the snowpack is really dusty, water just blasts out of the mountains.” The finding runs contrary to the widely held assumption that spring air temperature determines the likelihood of flooding.

Painter pointed out that the new finding doesn’t mean air temperatures in the region can be ignored in considering streamflows and flooding, especially in the future. “As air temperature continues to climb, it’s going to have more influence,” he said.

Temperature controls whether precipitation falls as snow or as rain, for example, so ultimately it controls how much snow there is to melt. But, he said, “temperature is unlikely to control the variability in snowmelt rates. That will still be controlled by how dirty or clean the snowpack is.”

The role of dust deposition for snowmelt timing and intensity here in the western U.S. has global implications for improved snowmelt forecasting and management of snow water resources.

The study has been published in the journal Geophysical Research Letters. Coauthors are from the University of Utah, Salt Lake City; University of Colorado, Boulder; and University of California, Santa Barbara.