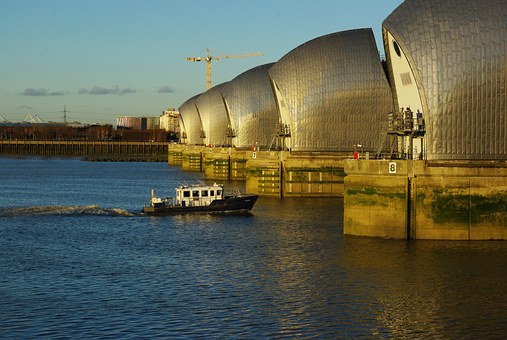 Thames Barrier protects 125 square kilometres of central London, millions of people, and £200 billion worth of assets

Sir James Bevan, Chief Executive of the UK’s Environment Agency has warned that failure to tackle climate change risks could see grim consequences for the planet.

In a speech at the Royal Society of Arts in London this week, Sir James told his audience that without intervention under a “hothouse Earth” scenario the world could cross a threshold leading to runaway climate change, with sea level rise up to 60m, which “would make most of the Earth uninhabitable.”

He urged them not to “glaze over and switch off” – “ how most people react” to the mention of climate change and a similar response to the phrase “sustainable development”, he said.

Pointing out that the rise in global temperature over the last several decades is a matter of public record, Sir James said there is an overwhelming scientific consensus that it can only be explained by one thing: the rise in greenhouse gas emissions caused by human activities.

It’s not as bad as you think – it’s worse

He went on to tell his audience that not only is global warming happening, it may be speeding up and pointed out that the 20 warmest years on record have all come since 1995, the five warmest years have all been in this decade with 2016 the hottest year since records began.

He acknowledged that the environment suffered badly as the UK had the joint hottest summer on record with numerous species, habitats, birds, trees and aquatic life affected by the hot conditions and high demand for water. While this wouldn’t happen every year, it will happen more frequently and “it will happen worse,” he said.

Just as the rate of temperature rise looks to be accelerating, so too does one of its main consequences: the rise in sea level. The EA Chief said that over the last 20 years sea levels have risen at roughly twice the speed of the preceding 80 years – and it gets worse.

Despite the international community’s pledge to avoid a rise of more than 2°C in the average global temperature by 2100 compared with pre-industrial levels, he warned that many scientists think that the figure will be higher.  “The central scientific estimate now is that by 2100 global temperature will have risen by nearly twice the 2 degree figure – by around 3.5 °C.” he added.

Sir James painted a grim vision of the consequences  of climate change and global warming, including:

“ Sea level rise is particularly scary, because while other climate change-driven effects like extreme flooding or drought can do terrible harm, recovery from them is possible. But there is no recovery from a rising sea: it takes land, communities, infrastructure and everything else away forever.” 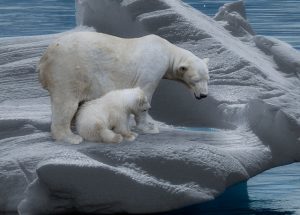 The changes in climate will have consequences which will mean:

With the UK located at a weather crossroads, with a big water mass to the west, a large land mass to the south and the jet stream running over the top, he went on to warn that it is “particularly exposed to these effects.”

If climate change is allowed to continue unchecked, he forecast that “England’s green and pleasant land will be neither green nor pleasant.”

“And if sea levels rise significantly, there won’t be much of our land left either.”

“But as sea levels rise and the storms get fiercer, how much higher can we build the walls around our coasts? There’s a limit to what’s practical and affordable.” 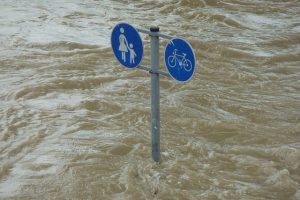 He also highlighted the problems arising from more rain which is likely to fall more quickly into rivers.  The rivers would fill up quicker and flood the surrounding land unless they could rapidly discharge into the sea.

However, higher tides and sea levels which climate change will also bring mean that “precisely when we need our rivers to be better at discharging water to the sea, they will be less and less able to do so, because they will be increasingly tide-locked.”

“So we could have three nightmare future scenarios: one where high seas overwhelm our sea defences, a second where the rivers flood the land behind the defences, and a third – the worst of all – where both of these things happen together.”

Failure to address these future risks would result in many low lying parts of the country being either permanently waterlogged, or flooded with such frequency as to be no longer habitable.

He referred to a report from an international team of climate researchers published this summer warning of a “hothouse Earth” – the risk that without intervention the world could cross a threshold leading to runaway climate change, with sea level rise up to 60m.

“That wouldn’t just make Lincolnshire and Britain history: it would make most of the Earth uninhabitable”, he said.

Disaster is not inevitable if we act now

However, the problem could be tackled, if we act now, he continued. While some of the effects of climate change – temperatures increasing, sea levels rising, wetter winters, more violent weather – would continue for the next 30-40 years, “we can affect what happens after that.”

The action needed could be summed up in two words: mitigation and adaptation. With most of the UK’s emissions coming from the way energy is produced and consumed,  the country could lower emissions by becoming more energy efficient and switching to renewable or low-carbon fuels.

Adaptation would mean making changes to prepare for, reduce and negate the effects of climate change, for example by building stronger sea defences to reduce the vulnerability of coastal communities. Other actions included:

According to the Environment Agency Chief, there was a “pretty broad consensus” in the UK on the need for action.

He pointed out that the Agency is already planning the successor to the Thames Barrier, which currently protects 125 square kilometres of central London, millions of people and £200 billion worth of assets. The Barrier is designed to sustain protection against a changing climate till around 2070.

“Why is tackling changing climate not at the top of everyone’s agenda?” He suggested that if words like “climate change” and “global warming” have become “a turn-off for most ordinary people” they should be changed, saying:

“Perhaps we should talk instead about what those things actually mean: killer weather, a world under water, and a mortgaged future.”

“Over the last two hundred years humans have comprehensively demonstrated that they can change the climate – and we have changed it for the worse by doing the wrong things.”

Now let’s show we can change it for the better by doing the right things.”