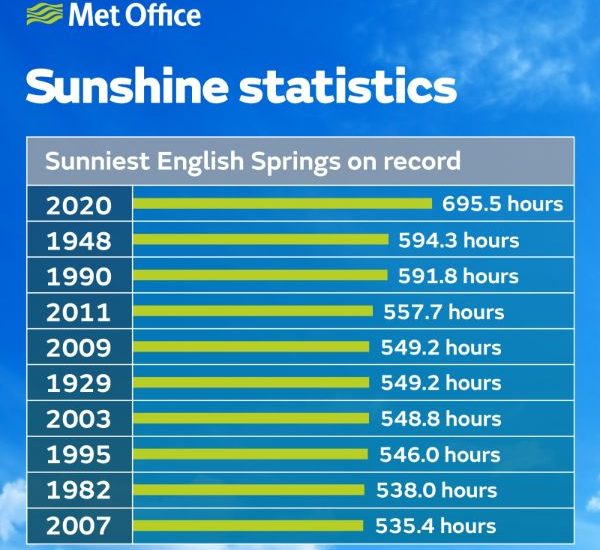 According to the latest weather data released by the UK Met Office, it has been the sunniest Spring on record for the UK, while May has become the sunniest calendar month on record in the UK and the driest May on record in England.

“The most remarkable aspect is just how much some of the May and Spring records for these climate statistics have been exceeded. Exceeding the UK sunshine record is one thing, but exceeding by over 70 hours is truly exceptional.

“The sunshine figures for spring would even be extremely unusual for summer and only three summers would beat Spring 2020 for sunshine hours.

“The principal reason for the dry and sunny weather is the extended period of high pressure which has been centred over or close to the UK. This has suppressed the development of clouds and rainfall over the UK, while allowing plenty of sunshine to reach the surface. There has been a band of similar weather conditions extending across central parts of Europe, whereas Iberia and parts of Scandinavia have experienced rather wetter conditions.”

All UK countries have recorded their sunniest spring on record in a series stretching back to 1929. 626 hours of bright sunshine were recorded in Spring 2020 for the UK and have exceeded the previous high (555 hours, set in 1948) by over 70 hours.

Spring 2020 also exceeds the sunshine amount for most summer seasons, with only three summers being sunnier (1976, 1995, and 1989). The figure for England is even higher. Spring 2020 recorded 696 hours of sunshine, exceeding the previous record set of 594.3 hours

It has been the fifth driest spring for the UK overall, but some counties in north east England and eastern Scotland have recorded their driest spring in a rainfall series from 1862.

“This has been an exceptionally dry spring, we have seen a fall in river flows and reservoir levels. However, at this time most water companies across the country have appropriate water reserves for this time of year.

“We work closely with all water companies to ensure their drought plans are up to date and activated as needed. Some will be following their plans as a precaution. We can all do our part to use water wisely and manage this precious resource, simple steps such as fitting a trigger to your hose or using a bucket to wash the car or water plants can make a difference.”