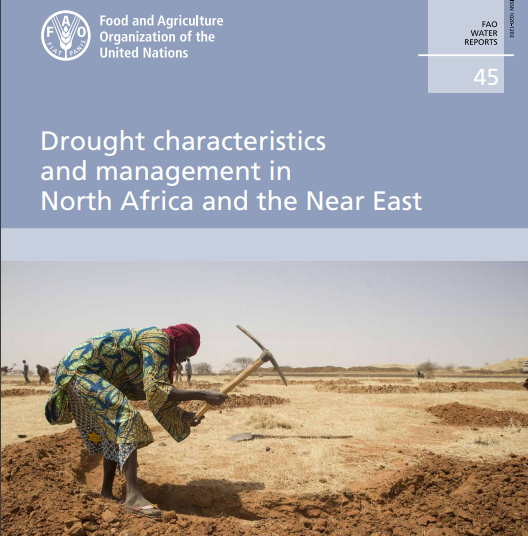 The UN Food and Agriculture Organization (FAO) has called for a fundamental shift in the way drought is perceived and managed in the Near East and North Africa region.

The agency said in a new report published this week that a more pro-active approach and long-term planning based on the principles of risk reduction is needed to build greater resilience to droughts.

Even though drought is a familiar phenomenon in the region, over the past four decades, droughts have become more widespread, prolonged and frequent – likely due to climate change.

The region is not only highly prone to drought, but also one of the world’s most water-scarce areas, with desert making up three quarters of its territory.

The FAO said the Near East and North Africa’s technical, administrative, and financial capacities to deal with drought are inadequate, rendering farmers and herders – the first and worst hit when drought strikes – even more vulnerable.

The report warns there is still too much focus on recovering from drought rather than being less susceptible to it, with insufficient funding, preparedness, and coordination remaining significant constraints, warns the report.

“The report assesses gaps in current drought management and provides a solid base to help governments rethink policies and reformulate preparedness and response plans by offering solutions that take into account each country’s specific context,” added Castro.

Launched ahead of World Day to Combat Desertification and Drought, the report was developed by FAO and the Water for Food Daugherty Global Institute at the University of Nebraska.

The latest drought in Northern Africa, in 2015-2016, affected all countries and caused a significant drop in cereal production in Algeria, Morocco and Tunisia.

Although preventing or mitigating drought impacts can be cheaper than providing drought relief, according to the FAO this does not necessarily translate into action through planning, budget allocations and changes in the institutions’ behaviour.

Providing emergency food assistance, access to water, fodder, and creating jobs are the most common approaches adopted by the region’s governments when supporting drought-stricken populations.

However, while these are essential to saving lives and alleviate hunger, they also have several limitations as they do not help vulnerable populations become more resilient to future shocks.

Many countries do not have a structure in place which is dedicated to drought and drought action plans. Coordination at the highest levels of governments when planning for droughts also need reinforcing.

Current agricultural policies are rendering land more degraded and impoverished, and need to be re-examined to mitigate the impacts of drought, the report says.

The report argues that developing and implementing national drought management policies consistent with the country’s development objectives as well as establishing early warning systems are essential.

It recommends disseminating technologies to combat drought, and support policies and incentives to use land and water resources rationally.

Growing drought-tolerant, fast maturing and watershed crops, and encouraging advanced methods of irrigation (including drip and spray irrigation) are among some of the measures that should be adopted at larger scale to combat climate change.