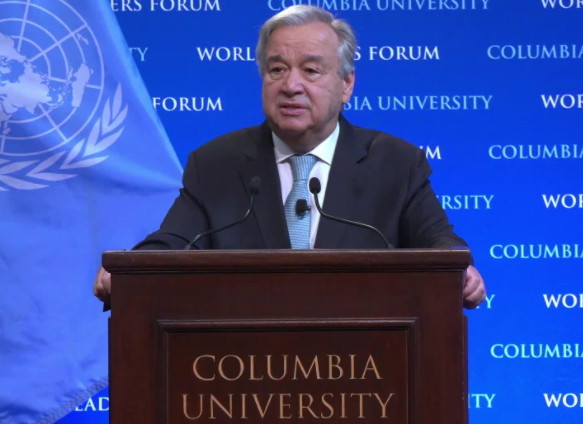 UN Secretary-General Antonio Guterres has issued a stark warning that the state of the planet is broken, biodiversity is collapsing, deserts are spreading and wetlands are being lost.

In a sombre speech delivered at Columbia University yesterday entitled “The State Of The Planet” he told his audience that humanity is waging war on nature saying;

“Nature always strikes back — and it is already doing so with growing force and fury.”

The Head of the UN flagged up the severe damage mankind is inflicting on the planet, including:

Today, the world is at 1.2 degrees of warming and already witnessing unprecedented climate extremes and volatility in every region and on every continent, he said, warning:

“We are headed for a thundering temperature rise of 3 to 5 degrees Celsius this century.

“The science is crystal clear: to limit temperature rise to 1.5-degrees Celsius above pre-industrial levels, the world needs to decrease fossil fuel production by roughly 6 per cent every year between now and 2030.”

“Instead, the world is going in the opposite direction — planning an annual increase of 2 per cent.”

Describing making peace with nature as “the defining task of the 21st century” he is calling for it to be “the top, top priority for everyone, everywhere.”

Three imperatives for the world in addressing the climate crisis

He outlined three imperatives for the world in addressing the climate crisis:

According to the Secretary-General every country, city, financial institution and company should adopt plans for transitioning to net zero emissions by 2050. In order to achieve this global emissions must be cut by 45 percent by 2030 compared with 2010 levels which must be made clear in the Nationally Determined Contributions.

However, commenting on the clean energy transition needed to achieve this, he went on to warn of “worrying signs” that some countries have used the crisis to roll back environmental protections, while others are expanding natural resource exploitation and retreating from climate ambition.

“The G20 members, in their rescue packages, are now spending 50 per cent more on sectors linked to fossil fuel production and consumption, than on low-carbon energy,” he pointed out.

On the key question of finance, according to the UN Chief the commitments to net zero emissions are sending a clear signal to investors, markets and finance ministers.

However, all governments now needed to translate the pledges into policies, plans and targets with specific timelines to provide certainty and confidence for businesses and the financial sector to invest for net zero. Measures Antonio Guterres is calling to be put in place include:

The Secretary General is calling on all asset owners and managers to decarbonize their portfolios and to join key initiatives and partnerships launched by the United Nations, including the Global Investors for Sustainable Development Alliance and the Net-Zero Asset Owners Alliance today with $5.1 trillion dollars of assets.

“Companies need to adjust their business models – and investors need to demand information from companies on the resilience of those models,” he said.

World is now in race against time

Describing the world as “in a race against time to adapt to a rapidly changing climate”, he told his audience:

“We have both a moral imperative and a clear economic case for supporting developing countries to adapt and build resilience to current and future climate impacts.

“Before COP 26, all donors and the Multilateral and National Development Banks should commit to increase the share of adaptation and resilience finance to at least 50 per cent of their climate finance support.”

“We need to move to large-scale, preventive and systematic adaptation support.”

According to the Global Commission on Adaptation, every $1 invested in adaptation could yield almost $4 in benefits.

Other actions the UN Secretary General is calling for include:

He concluded on an optimistic note, announcing that at the beginning of 2021, the UN will launch the UN Decade on Ecosystem Restoration focused on preventing, halting and reversing the degradation of forests, land and other ecosystems worldwide.

“The Decade is a rallying cry for all who want to tackle the twin crises of biodiversity loss and climate change with practical and hands-on action” he said.

Describing nature itself as “one of our best allies”, according to   drastically reducing deforestation and systemically restoring forests and other ecosystems is the single largest nature- based opportunity for climate mitigation. Nature-based solutions could provide one third of the net reductions in greenhouse gas emissions required to meet the goals of the Paris Agreement.

He ended his speech by saying:

“This is a moment of truth for people and planet alike. COVID and climate have brought us to a threshold.…..Now is the time to transform humankind’s relationship with the natural world – and with each other.”