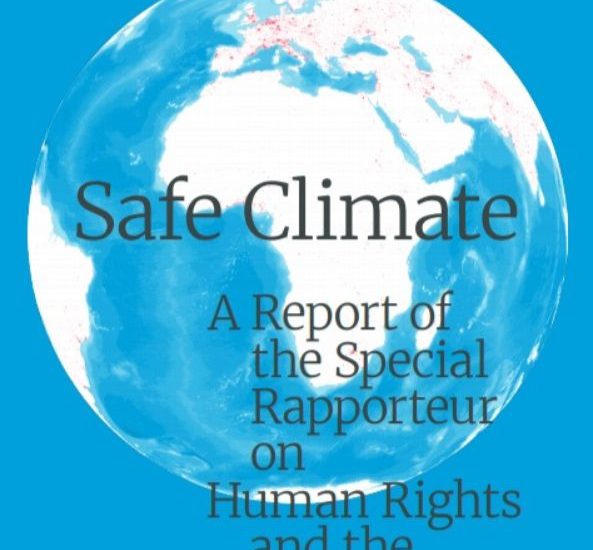 A new report by David Boyd the United Nations Special Rapporteur on the issue of human rights obligations is warning that climate change is threatening the right to water and sanitation,

The report says that every year, 150,000 premature deaths are being linked to the climate crisis—and the number is set to increase with rising temperatures. The climate-related deaths are caused by extreme weather events, heat waves, floods, droughts, wildfires, water-borne and vector-borne diseases, malnutrition and air pollution.

The report is warning that the climate crisis is threatening the right to water and sanitation, contributing to water crises like the one in Bolivia, where glaciers are receding, and water rationing has been required in major cities. At 2°C, 100 million more people are forecasted to face water insecurity.

Four key elements of the rights to water and sanitation are threatened: availability, accessibility, acceptability and quality.

According to the Lancet Commission on Health and Climate Change, the climate crisis is the biggest global health threat of the twenty-first century and could reverse five decades of progress in global health, particularly as it endangers the right to food.

Entire communities, such as Vunidogoloa, Fiji, have been or are in the process of being relocated owing to rising sea levels, coastal erosion, storm surges, salinization and other climate impacts. It is estimated that by 2050, 150 million people or more could be displaced by the impacts of the climate crisis. Over a longer timeframe, entire states are at risk of becoming uninhabitable, including Kiribati, Maldives and Tuvalu. The report says that displacement is threatening the right to a healthy environment.

The Safe Climate report says that governments have an obligation to take effective measures to mitigate climate change, enhance the adaptive capacity of vulnerable populations and prevent foreseeable loss of life.

This includes preventing the potential violation of rights by third parties, especially businesses, as well as establishing, implementing and enforcing laws, policies and programmes to fulfil their citizens’ rights.

The Special Rapporteur is calling on wealthy states to contribute their fair share towards the cost of mitigation and adaptation in low-income countries—as countries are not equally responsible—nor affected—by the climate crisis.

In his report he also identifies that, as a first step, corporations should comply with the Guiding Principles on Business and Human Rights as they pertain to human rights and climate change. Businesses should adopt human rights policies, conduct human rights due diligence, remedy human rights violations for which they are directly responsible, and work to influence other actors to respect human rights, the Rapporteur says.

The human rights obligations related to climate change have been explored by various organizations, including international courts, governments and United Nations human rights bodies. The experts, which include David Boyd, have reached two common conclusions:

In the report, the Special Rapporteur  discusses the urgent need for action to ensure a safe climate for humanity. He illustrates the devastating effects of the current global climate emergency on the enjoyment of human rights, and the crucial role for human rights in catalysing action to address climate change.

Practical recommendations set out in the report include:

The Special Rapporteur is calling for the introduction of wide-ranging measures on fossil fuels, including:

The report, together with an annex on good practices has been submitted to the Office of the United Nations High Commissioner for Human Rights.

Drawn from every continent and featuring more than 60 States and a wide range of actors, the good practices are intended to inspire ambitious action to address the global climate emergency.