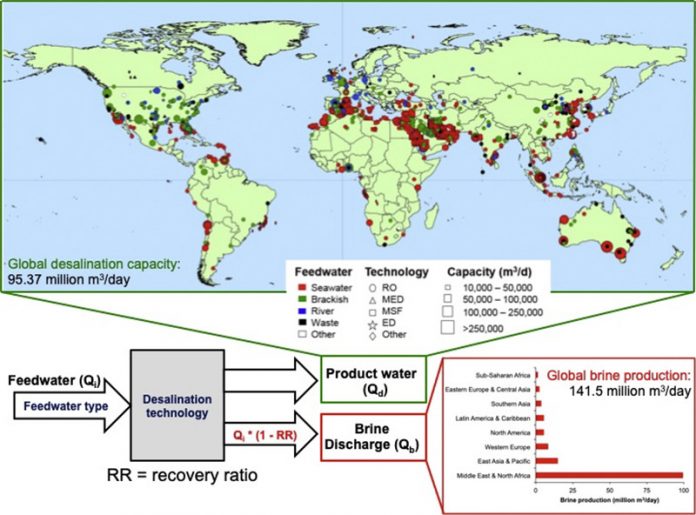 In the UN-backed paper The state of desalination and brine production: A global outlook, experts estimate the freshwater output capacity of desalination plants at 95 million cubic metres per day — equal to almost half the average flow over Niagara Falls.

The paper has been produced by the UNU Institute for Water, Environment and Health (UNU-INWEH), the UN think tank on water,  which is hosted by the Government of Canada and McMaster University.

Starting from a few, mostly Middle Eastern facilities in the 1970s, today almost 16,000 operational desalination plants are found in 177 countries. Two-thirds of such plants are in high-income countries. 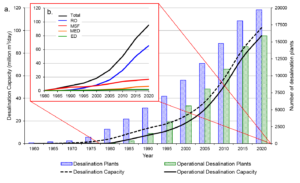 The fast-rising number of desalination plants worldwide —with capacity concentrated in the Middle East and North Africa — meet a growing thirst for freshwater which brings with it the dilemma of how to deal with all the chemical-laden leftover brine.

For every litre of freshwater output, however, desalination plants produce on average 1.5 litres of brine (though values vary dramatically, depending on the feedwater salinity and desalination technology used, and local conditions).

The authors, from the United Nations University Institute for Water, Environment and Health (Canada), Wageningen University (Netherlands), and the Gwangju Institute of Science and Technology (Republic of Korea) analysed a newly-updated dataset — the most complete ever compiled — to revise the world’s badly outdated statistics on desalination plants.

They are now calling for improved brine management strategies to meet a fast-growing challenge, noting predictions of a dramatic rise in the number of desalination plants, and hence the volume of brine produced, worldwide.

The paper found that 55% of global brine is produced in just four countries:

Middle Eastern plants, which largely operate using seawater and thermal desalination technologies, typically produce four times as much brine per cubic metre of clean water as plants where river water membrane processes dominate, such as in the US.

East Asia and Pacific and North America regions produce 18.4% and 11.9% of the global desalinated water, primarily due to large capacities in China (7.5%) and the USA (11.2%) respectively.

The widespread use of desalination in Spain (5.7%) accounts for over half of the total desalination in Western Europe (9.2%). The global share in desalination capacity is lower for Southern Asia (3.1%), Eastern Europe and Central Asia (2.4%) and Sub-Saharan Africa (1.9%), where desalination is primarily restricted to small facilities for private and industrial applications.

Brine produced inland poses an important problem for many countries located in all world regions, with 64 countries producing more than 10,000 m3/day of brine in inland locations.

Desalination plants near the ocean (almost 80% of brine is produced within 10 km of a coastline) most often discharge untreated waste brine directly back into the marine environment.

The authors cite major risks to ocean life and marine ecosystems posed by brine greatly raising the salinity of the receiving seawater, and by polluting the oceans with toxic chemicals used as anti-scalants and anti-foulants in the desalination process (copper and chlorine are of major concern).

Lead author Edward Jones, who worked at UNU-INWEH and is now at Wageningen University, commented:

“High salinity and reduced dissolved oxygen levels can have profound impacts on benthic organisms, which can translate into ecological effects observable throughout the food chain.”

Meanwhile, the paper highlights economic opportunities to use brine in aquaculture, to irrigate salt tolerant species, to generate electricity, and by recovering the salt and metals contained in brine — including magnesium, gypsum, sodium chloride, calcium, potassium, chlorine, bromine, and lithium.

With better technology, a large number of metals and salts in desalination plant effluent could be mined.  These include sodium, magnesium, calcium, potassium, bromine, boron, strontium, lithium, rubidium and uranium — all used by industry, in products, and in agriculture. The needed technologies are immature, however; recovery of these resources is economically uncompetitive today.

“There is a need to translate such research and convert an environmental problem into an economic opportunity”, author Dr Manzoor Qadir, Assistant Director of UNU-INWEH said.

“This is particularly important in countries producing large volumes of brine with relatively low efficiencies, such as Saudi Arabia, UAE, Kuwait and Qatar.”

“Using saline drainage water offers potential commercial, social, and environmental gains.  Reject brine has been used for aquaculture, with increases in fish biomass of 300% achieved.  It has also been successfully used to cultivate the dietary supplement Spirulina, and to irrigate forage shrubs and crops (although this latter use can cause progressive land salination).”

According to Dr Vladimir Smakhtin, Director of UNU-INWEH and a co-author of the paper, around 1.5 to 2 billion people currently live in areas of physical water scarcity, where water resources are insufficient to meet water demands, at least during part of the year. Around half a billion people experience water scarcity year round.

“There is an urgent need to make desalination technologies more affordable and extend them to low-income and lower-middle-income countries. At the same time, though, we have to address potentially severe downsides of desalination — the harm of brine and chemical pollution to the marine environment and human health.”

“The good news is that efforts have been made in recent years and, with continuing technology refinement and improving economic affordability, we see a positive and promising outlook.”

The process is becoming more affordable, the paper says, attributable to falling costs due to continued improvements in membrane technologies, energy recovery systems, and the coupling of desalination plants with renewable energy sources.

Brine management can represent up to 33% of a plant’s cost and ranks among the biggest constraints to more widespread development.