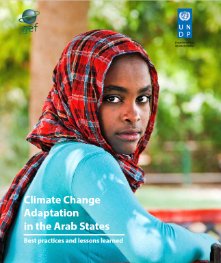 Introducing the report, the UNDP said the Arab region is home to rising levels of conflict and the world’s largest population of refugees and displaced people. Simultaneously, it is also now the planet’s most water scarce and food-import-dependent region – and the only region where malnutrition rates have been rising.

UNDP is supporting countries in the four sub-regions of the Arab region (Mashreq, Maghreb, Arab Gulf and Horn of Africa) to adapt to climate change impacts and to prepare for disaster risks.

In the Arab States, the causes of crises, food insecurity, malnutrition and vulnerability to climate change impacts are deeply interlinked and require multifaceted responses.

Over-exploitation of natural resources in the region has also led to severe ecosystem degradation, while poor land and water management are reducing the potential provision of already limited ecosystem services, according to the UNDP .

The impacts of climate change are exacerbating the existing challenges of sustainably managing limited natural resources. Climate change-related desertification has expanded in the Arab region, greatly increasing the vulnerability of the local population.

UNDP support has been targeted at some of the least developed countries (LDCs), namely: Djibouti, Somalia, Sudan, and the Republic of Yemen; Tunisia in the Maghreb; and the Arab Republic of Egypt, Iraq, Jordan, Lebanon and the occupied Palestinian territories in the Mashreq.

The projects have aimed to improve natural resource governance and management while balancing socio-economic needs and environmental protection. Currently, UNDP’s Climate Change Adaptation (CCA) portfolio includes two projects in Djibouti and Sudan in addition to single projects in Egypt, Somalia, Tunisia and Yemen. The first UNDP CCA project in the Arab region was launched in Egypt in 2010 with financing from the Global Environment Facility’s (GEFs) Special Climate Change Fund (SCCF).

Since then, the portfolio includes ongoing projects with a total financing of approximately US$42 million, primarily financed by GEF, the Adaptation Fund (AF) and UNDP. Most recently, UNDP has also supported Egypt in accessing financing from the Green Climate Fund (GCF) for coastal adaptation.

In parallel to GEF supported initiatives, UNDP has also supported Djibouti, Egypt, Iraq, Jordan, Lebanon, the occupied Palestinian territories, Somalia, Sudan and Tunisia in disaster risk reduction and recovery with projects from 2005-2016 valued at US$151 million, through support of UNDP resources and bilateral donors like Canada, the European Commission, Iceland, Japan, Kuwait, Switzerland and the US.

Lessons learned set out in the report include:

The immediate objective of this publication is not only to share experiences with a wider audience, but also to inform future CCA programming. The publication furthermore acts as a call to action to facilitate a long-term coordinated approach to increasing the resilience of countries most vulnerable to climate change in the region.