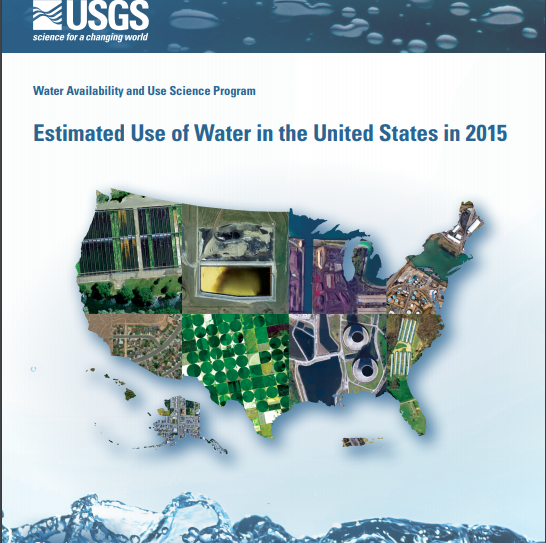 United States water use reached its lowest recorded level in 45 years, according to a new report  published by the USGS, the largest water, earth, and biological science and civilian mapping agency in the United States.

The USGS report says 322 billion gallons of water per day (Bgal/d) were withdrawn for use in the United States during 2015. This represents a 9 % reduction of water use from 2010 when about 354 Bgal/d were withdrawn and the lowest level since before 1970 (370 Bgal/d).

“The downward trend in water use shows a continued effort towards efficient use of critical water resources, which is encouraging,” said Tim Petty,

assistant secretary for Water and Science at the Department of the Interior. “Water is the one resource we cannot live without, and when it is used wisely, it helps to ensure there will be enough to sustain human needs, as well as ecological and environmental needs.” 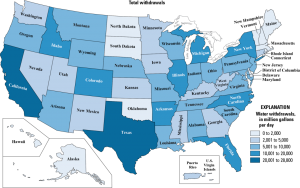 In 2015, more than 50 % of the total withdrawals in the United States were accounted for by 12 states (in order of withdrawal amounts): California, Texas, Idaho, Florida, Arkansas, New York, Illinois, Colorado, North Carolina, Michigan, Montana, and Nebraska. 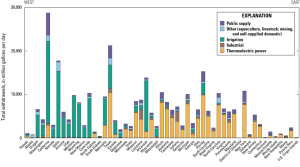 Graph showing total water withdrawals by category and by State from west to east, 2015. [1 Bgal/d = 1,000 million gallons per day].

California accounted for almost 9 % of the total withdrawals for all categories and 9 % of total freshwater withdrawals.

Texas accounted for about 7 % of total withdrawals for all categories, predominantly for thermoelectric power generation, irrigation, and public supply.

“The USGS is committed to providing comprehensive reports of water use in the country to ensure that resource managers and decision makers have the information they need to manage it well,” said USGS director Jim Reilly. “These data are vital for understanding water budgets in the different climatic settings across the country.”

For the first time since 1995, the USGS has estimated consumptive use for two categories — thermoelectric power generation and irrigation. Consumptive use is the fraction of total water withdrawals that is unavailable for immediate use because it is evaporated, transpired by plants, or incorporated into a product.

“Consumptive use is a key component of the water budget. It’s important to not only know how much water is being withdrawn from a source, but how much water is no longer available for other immediate uses,”  said USGS hydrologist Cheryl Dieter.

Water withdrawn for thermoelectric power generation was the largest use nationally at 133 Bgal/d, with the other leading uses being irrigation and public supply, respectively. Withdrawals declined for thermoelectric power generation and public supply, but increased for irrigation. Collectively, the three uses represented 90 % of total withdrawals. 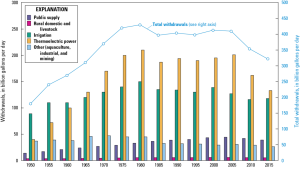 A number of factors can be attributed to the 18 % decline in thermoelectric-power withdrawals, including a shift to power plants that use more efficient cooling-system technologies, declines in withdrawals to protect aquatic life, and power plant closures.

The USGS is the world’s largest provider of water data and the premier water research agency in the federal government.