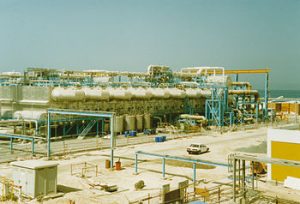 Veolia Water Technologies, through its subsidiary SIDEM, has recorded an excellent year in the desalination field, notably due to 3 major contracts in the Middle East.

The most recent is a contract to engineer and procure the future Umm Al Quwain desalination plant in the United Arab Emirates.

Located at a coastal site in the Emirate of Umm Al Quwain along the border of Emirate of Ras Al Khaimah, the project is part of the UAE’s effort to optimize water production and meet the increasing demand for water in the country.

As part of a consortium, Veolia will be in charge of engineering and procurement for the 150 MIGD (681,900 m³/day) Seawater Reverse Osmosis Independent Water Project (IWP) while Chinese partner Gezhouba Group International Engineering will undertake construction.

Once commissioned, the Umm Al Quwain plant will be the largest desalination project in the Northern Emirates. The plant is expected to be commercially operational by July 2022.

”The recent successes that our team has earned on the desalination market are a testament to the extent of our expertise. These contracts strengthen our position as leader in desalination and as a key partner for stakeholders in the Middle East. We are honored to be working with our partners to bring water security and accelerate the sustainable development of the UAE.”