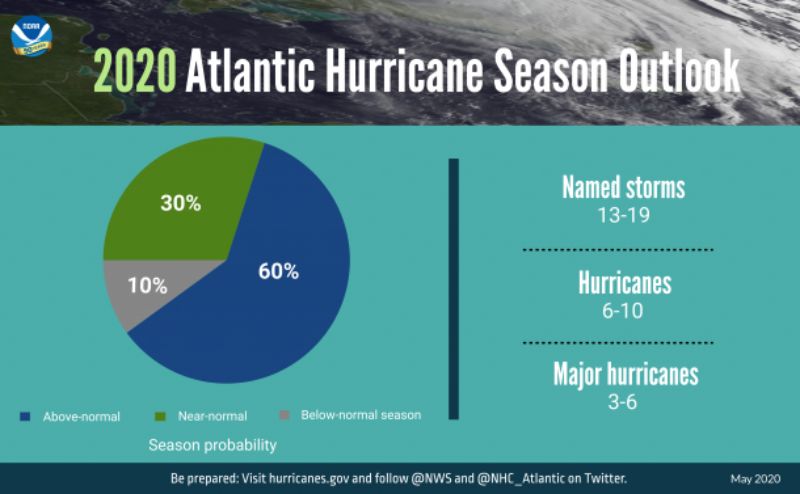 The World Meteorological Organization is warning that an above-normal 2020 Atlantic hurricane season is expected because of a number of climate factors and warmer-than-average sea surface temperatures.

The Atlantic hurricane season runs from June 1 through November 30.

The combination of several climate factors is driving the strong likelihood for above-normal activity in the Atlantic this year.

Firstly, there is unlikely to be an El Niño event, which typically suppresses hurricane activity.

Similar conditions have been producing more active seasons since the current high-activity era began in 1995.

“NOAA’s analysis of current and seasonal atmospheric conditions reveals a recipe for an active Atlantic hurricane season this year,” said Neil Jacobs, Ph.D., acting NOAA administrator. “Our skilled forecasters, coupled with upgrades to our computer models and observing technologies, will provide accurate and timely forecasts to protect life and property.”

Meteorologists use state-of-art technologies and modern techniques such as numerical weather prediction models to forecast how a tropical cyclone evolves, including its movement and change of intensity; when and where one will hit land and at what speed.

The US National Hurricane Center acts as WMO’s Regional Specialized Meteorological Center, providing forecasts and products including storm surge for the North Atlantic and the Caribbean, and eastern North Pacific. Official warnings are then issued by the National Meteorological Services of the countries concerned.

The WMO is also warning that the COVID-19 pandemic, with its requirements for social distancing and stay-home measures, as well as the additional burden it has placed on health infrastructure, means that the forthcoming hurricane season will be especially challenging.

It also means that the need for reliable forecasts with longer lead time and coordination disaster management plans are more important than ever before.

In 2019 Category 5 Hurricane Dorian hit the Bahamas as the strongest hurricane on record, bringing massive devastation and many casualties. Hurricanes Florence and Michael caused major impacts in the United States in 2018.

The 2017 hurricane season was one of the worst on record, reversing socioeconomic development for many communities. Three devastating major hurricanes made landfall (Harvey in Texas; Irma in the Caribbean and southeastern USA; and Maria in the Caribbean and Puerto Rico), with major loss of life and damage to infrastructure and agriculture.