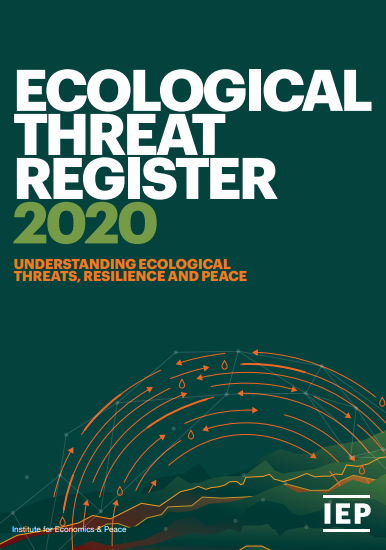 The inaugural edition of the Ecological Threat Register (ETR), which covers 157 independent states and territories is warning that countries facing the highest number of ecological threats are among the world’s least peaceful countries

The ETR measures ecological threats that countries are currently facing and provides projections to 2050.

The Register analyses population growth, water stress, food insecurity, droughts, floods, cyclones, rising temperatures and sea levels. The ETR is unique in that it combines measures of resilience with the most comprehensive ecological data available to shed light on the countries least likely to cope with extreme ecological shocks, now and into the future. Key findings include:

The lack of resilience in countries covered in the ETR will lead to worsening food insecurity and competition over resources, increasing civil unrest and mass displacement, exposing developed countries to increased influxes of refugees.

By 2040 5.4 billion people – more than half of the world’s projected population – will live in 59 countries experiencing high or extreme water stress

In addition, it is estimated that the combined effects of rising temperatures, population growth and increased rainfall variability are likely to reduce the water supply in many countries.

The ETR is warning that the world’s least resilient countries, when faced with ecological breakdowns, are more likely to experience civil unrest, political instability, social fragmentation and economic collapse. However, ecological and humanitarian crises often spill over across international borders, increasing the likelihood of civil unrest and political instability in adjacent countries.

Currently, more than one billion people live in countries that are unlikely to have the ability to mitigate and adapt to new ecological threats.

The report is recommending that to reduce the impact of future ecological shocks, it is important to increase the levels of resilience in the most vulnerable countries. This will enable countries to be better prepared for shocks, but also to have stronger capabilities to deal with the after effects of these shocks.

High resilience regions, such as Europe and North America, have superior coping capacities to mitigate the effects of these ecological threats, but they will not be immune from large flows of refugees. Building resilience to ecological threats will increasingly become more important and will require substantial investment today.