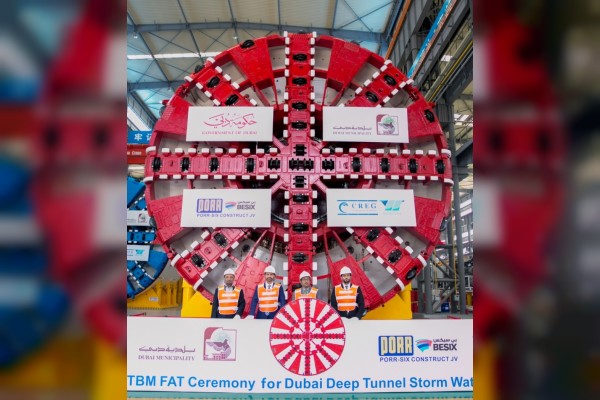 The Deep Tunnel Storm Water System project is needed for Airport City-Expo 2020, one of the most vital and strategic projects in the Emirate of Dubai. The TBMs, which have been manufactured by China Railway Engineering Equipment Group (CREG), were ordered by the Porr-Six Construct joint venture (JV) – Dubai Municipality awarded the tunnel contract to the JV in October 2017.

The two TBM machines, which will be the largest in the United Arab Emirates, are expected to arrive at the site in October 2018 with excavation due to start in December. The cutting diameter of one TBM machine will be 11.05 metres and the average daily drilling will be 19 metres per TBM – the finished internal diameter of the tunnel will be ten metres.

In parallel, the second TBM drilling machine will start work from the Expo intersection on Jebel Ali – Al Habab Street for a distance of 5 km and will continue until the eighth intersection on Sheikh Zayed Road, he said.

“The drilling will be done in two types of soil; the weak rocky soil and clay soil with an average depth of 42 meters. The tunnel with a diameter of 10 metres will consist of eight concrete segments per ring, each 35 cm thick. There will be two segment types – 1.6m and 2m wide and each piece will be weighing seven tons. These pieces will be fixed by iron pegs and sealed with epoxy,” said Al Hajiri.

The Dubai Deep Tunnel Storm Water System, designed by Stantec in Dubai, is one of the largest integrated drainage tunnels in the region and has allowed adoption of Sustainable urban Drainage Systems for the first time in the UAE.

When complete the tunnel will manage rainwater and groundwater, draining almost 40% of Dubai’s entire urban area and cover an area of 490 square km including Dubai South, Al Maktoum International Airport, Expo 2020 Dubai and other neighbouring localities.