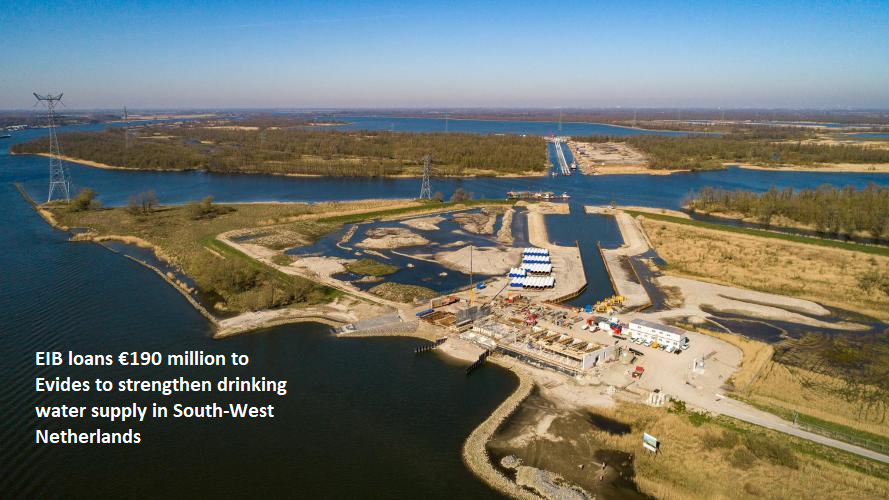 The European Investment Bank (EIB) has signed a €190 million loan agreement with Evides Waterbedrijf, the company that manages the drinking water supply in large parts of the south-western Netherlands.

The loan will help Evides to improve and maintain its water distribution network beyond 2024, making it more climate-resilient.

Evides supplies drinking water to 2.5 million clients in its home market – the southern part of the province of Zuid-Holland, the entire province of Zeeland, and the Brabantse Wal. The company’s drinking water supply is sourced 80% from the river Maas, 16% from ground water, and 4% from dune water.

Evides is the second-largest water company in The Netherlands based on supply connections, supply volumes and revenue.

The funding is intended to support investments to improve the quality and functionality of water treatment and distribution facilities, and will increase the resilience of the surface water supply during long periods of extreme weather events foreseen in the future, such as more frequent and prolonged drought periods.

More specifically, the financing will sustain Evides’ 2020-2024 investment programme, focusing mainly on the rehabilitation and upgrading of production installations, storage facilities and pumping stations. The project will thereby secure or enhance the quality of life of up to 2.5 million residents in the provinces of Zeeland, the south-west of the province South-Holland and the west of the province North Brabant, by improving the reliability and affordability of the drinking water supply service.

“Many people don’t realise the amount of work and investment that goes into the upkeep of such a high quality water network as that of the Netherlands.”

“The EIB has a long track record in the country, having financed nearly all water companies in the last five years, and we’re happy to support Evides again in their push to provide high quality water to their clients.”

“This new facility underlines the mutual trust between the EIB and Evides Waterbedrijf. As a company, we are glad to be able to count on the financial support of the EIB to realise our investment ambitions for a reliable water supply in the years to come,” added Edgar Ruijgers, CFO at Evides N.V.

This is the second operation with Evides funded by the Bank, after a previous operation in 2014.

The EIB is the European Union’s long-term lending institution and is directly owned by the Member States – the Netherlands owns slightly more than 5% of the shares – and can therefore borrow very cheaply on the capital market.