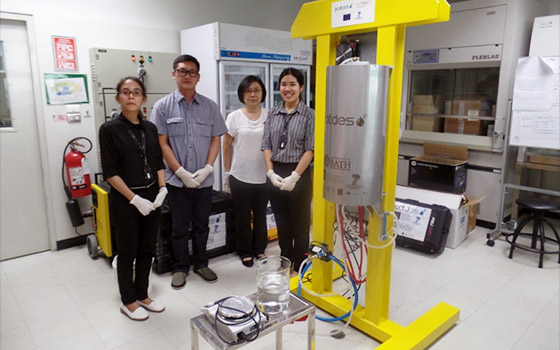 For small producers of such goods, for example in rural parts of Asia, the cost of decontaminating wastewater to the required standard can be a heavy burden.

The photoreactor technology proposed by the PCATDES project uses light-emitting diodes (LEDs) to deal with “recalcitrant” organic pollutants in industrial wastewater. Filtration and microbiological treatment can only remove 95 % or so of the organic matter in effluent from oil mills and seafood processing facilities.

In February 2013 partners in the € 5 million project, which ran until January 2017, set out to develop compact, affordable photocatalytic devices in a bid to solve the problem –  part of the work was carried out by a project partner in Malaysia.

Doing so involved taking photocatalytic decontamination technology another step ahead, notably by creating new material to achieve high reactivity rates. Participants from Germany, Spain, Malaysia, Thailand, Vietnam, Turkey and the United Kingdom were involved in the project, which was led by the University of Cardiff.

By the time the project ended in January 2017, the partners had jointly developed two types of device. One of these was a batch reactor intended for use in the project’s experiments, while the other – a scalable model designed for continuous throughput – was deployed to production sites in the three participating Asian countries.

Part of the work conducted in Asia was performed by SIRIM Berhad, the Malaysian government’s centre for research and technology development.

“We were involved in the development of the photocatalytic material and the coating of this material on various substrates.”

“SIRIM also contributed to various studies conducted during the development and operation of the photocatalytic reactor, and to the sustainability evaluation.”

A well-integrated waste management system that helps to reduce water contamination and also makes substantial volumes of treated water available for reuse would support sustainable growth in the industries targeted by PCATDES.

Referring more specifically to the example of palm oil production, she explained that the approach focuses on the post-treatment of effluent, i.e. of wastewater that has already undergone anaerobic and aerobic biological processing. “The strategy is to combine existing wastewater treatment with the photocatalytic treatment system, leading towards zero discharge for the palm oil industry,” she said.

PCATDES covered the entire product development process, from the initial concept to the production of a prototype –in addition, it delivered a system that can be used for future research work.

The networking between the different organisations has broadened and opportunities for future research collaboration are now being considered.