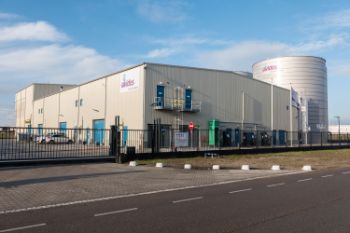 One of Europe’s largest industrial water and wastewater companies – Evides Industriewater – has this month announced the opening of a UK office as it continues to embark on ambitious growth plans that has seen the business strengthen its position in existing markets and open new opportunities.

Evides Industriewater – headquartered in Rotterdam – has over 50 years’ experience providing innovative approaches to wastewater treatment and water reuse and in the last two years began its move into the UK market.

The UK business is already in advanced talks with many of the of the industry’s leading players and in choosing its UK office base has selected one of the country’s  largest industrial zones – Teesport – as its permanent base.

The site – which forms part of the South Tees Development Corporation’s ambitious redevelopment plans to provide heat and electricity to advanced manufacturing facilities and residential properties in neighbouring areas – already houses some of the region’s largest industrial businesses and only recently announced planning permission for the development of a £300million Waste to Energy plant led by PMAC Energy and funders, Low Carbon.

Set to be the first net zero industrial cluster in the UK, Teesport provides excellent road, rail and port facilities to both UK and European markets and – in its makeup of high-water users and complimentary industries – demands something similar to the centralised industrial water infrastructure designed, built and operated by Evides in Rotterdam.

This plant – which supplies demineralised water for the 85-hectare, port-based Huntsman site – has been designed to supply reliable and sustainable process water and centralised wastewater treatment to the surrounding clustered industry, a solution Evides is keen to emulate on the Teesport site.

“We were very serious about entering the UK market and – as a result of several advanced project discussions with some of the UK’s largest industrial players – it became vital we opened a UK office.  It made absolute sense in doing that for us to choose a strategic location linked to, not only some of the biggest water users in the North East region – and indeed the UK – but also to an area committed to delivering the UK’s first zero-carbon industrial cluster.

“And with BP’s recent announcement to build the UK’s largest hydrogen project located in Teeside and producing up to 1GW of blue hydrogen, it made absolute sense that, as Europe’s largest supplier of water to the Hydrogen production industry, Evides had its UK base located in the region likely to become the UK’s first hydrogen hub.”

The Evides UK business will focus on working with those industries using vast amounts of water and where wastewater has complex treatment needs. This includes industries such as Pharmaceutical, Petrochemical and Steel together with the Food and Beverage and Energy sectors including carbon capture and storage.

Evides Industriewater has been operating in Rotterdam since 1968. The company prides itself on providing an entire water cycle for its industrial clients that improves the efficiency of business processes, reduces environmental impact and significantly reduces operational risk.

The company boasts clients including BASF, Royal Dutch Shell, Huntsman and AkzoNobel amongst its extensive customer base and – on behalf of these – Evides Industriewater operates 77 water treatment, wastewater treatment and water reuse plants across Europe.