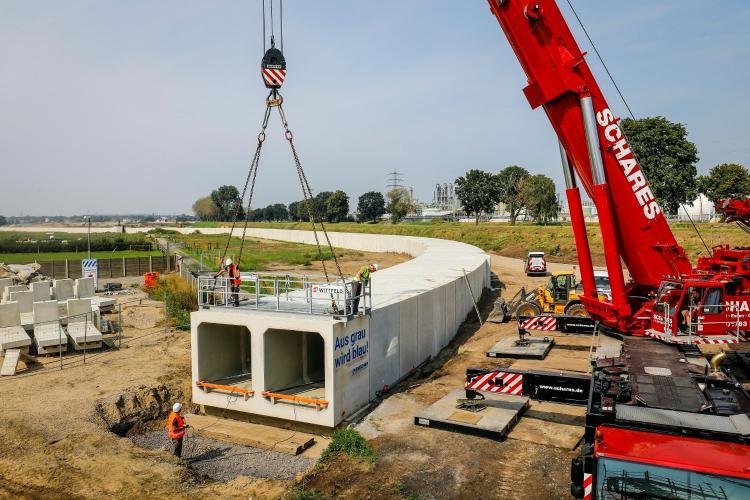 One of Europe’s largest environmental projects is to receive additional support from the EIB -the EU bank is providing a further €500 million framework loan to Emschergenossenschaft for the large-scale rehabilitation of the river system in the Ruhr.

With the framework loan, the EIB is co-financing Emschergenossenschaft’s investment programme for the period 2020–2024. After deals struck in 2011, 2013 and 2017, this is the fourth EIB loan for this comprehensive development initiative.

This takes the EIB’s total funding for the long-term River Emscher conversion project to €1.8 billion. In addition to the large volumes, the EIB can also offer particularly attractive lending terms: The loans have a maturity of up to 45 years and can have fixed interest rates despite the length of their terms. The low interest rates available today can therefore be locked in for the long term.

Flagship project for all of Europe

On the occasion of the signing of the contract, EIB President Werner Hoyer said:

“The Emscher rehabilitation project is a real showcase for the whole of Europe. It shows how a region shaped by industry over several decades can be restored to a near-natural landscape.

“The people here in the Ruhr area are not only given back a river, but also something that improves their quality of life. I am therefore immensely proud that as the EU bank, we are supporting Emschergenossenschaft with such an essential project by providing €1.8 billion to date.

“Initiatives like the Emscher rehabilitation project are key to sustainable environmental and climate protection. And it is specifically these projects that testify to the concrete benefits the European Union can provide for its citizens.”

With more than five million inhabitants, the Ruhr area is the largest urban area in Germany. The River Emscher passes through central Ruhr – a region in which almost two-and-a-half million people live. Mining has shaped the region economically, and has also had a significant impact on the landscape. Subsidence caused by coal mining meant that no underground sewerage system could be installed, leading to the Emscher and its tributaries being used as an open sewer for almost a century. Only the northward migration of the mining industry in the late 1980s made the Emscher rehabilitation project possible

The extensive, long-term project is accompanied by the ecological reconstruction of the riverscape. The Emscher River is being restored to a near-natural state which will see former farmland and brownfield sites returned to nature.

This is creating important natural and recreational space in the densely populated region, and is already significantly improving the quality of life for the people living there. The Emscher should be mostly wastewater-free again by the end of 2020.

Uli Paetzel, Chairman of the Executive Board of Emschergenossenschaft, commented:

“With an investment volume of more than €5 billion and a duration of more than three decades, our Emscher conversion is not only one of the most important water resource projects in the region, but has also become an international flagship initiative, adding value for both people and the natural environment.

“We are investing not only in revitalising an entire riverscape, but also and above all in the quality of life of residents in the heart of the Ruhr area. The focus is on urban development in the region as well as on climate change adaptation.