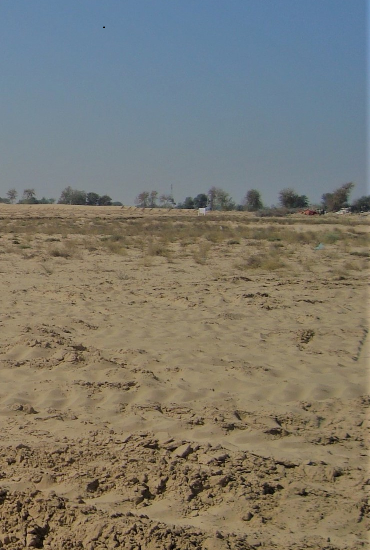 An innovative technology which mixes nano-particles of clay with water and binds them to sand particles has the potential to transform desert sand into arable farmland and be a game changer for farmers in arid regions.

Developed by Norwegian scientist Kristian Morten Olesen,  the patented Liquid Nanoclay (LNC) process could be used to create useful land for crop growing, green spaces or as a means to combat desertification in areas of the world which face extreme environmental conditions.

Desert Control, the company set up to bring LNC to market, has been hosting a trial using LNC since last December in the United Arab Emirates at Al Ain in Dubai – and the results have demonstrated the huge potential of the technology.

The results have exceeded expectations -the trial has demonstrated that the same vegetables can be produced in both fields but have used 77% less water in the LNC-treated field. In addition, using less water to  irrigate means nutrients and fertiliser are kept in the soil and not washed away so the crops are getting more nutrition than in the reference field.

The process mixes  water and clay to create nanoclay which is sprayed or injected directly onto dry, sandy land, creating a water-retaining network in the soil profile. The clay wraps around each sand particle to create a coating which completely changes their physical properties, thereby  increasing the possibility of agricultural yield.

The innovation which turns desert sand into farmland has also been tested in Egypt, Pakistan and China and has now reached a point in product development where it can be reproduced.

The potential benefits are significant – in addition to creating a more robust organic network which is ideal for plant growth and higher yield, a water retention capability of up to 65% means less water required and major cost reductions.

Interviewed on Dubai TV recently, Brage W. Johansen Chairman & iCEO of Desert Control, said the company is now looking for its first commercial contract either with a private land owner or the government. The firm, which is looking for big projects – several hectares or tens of hectares – has identified  three potential markets for LNC:

Combating desertification or reclaiming the desert e.g. by creating a forest
Agriculture
Parks, golf courses and other urban and city green spaces

“We’re looking for a commercial project and investment so we can industrialise the process. We think this is such an obvious and quick solution the whole world deserves it but we’re starting in the UAE .”

“We don’t need that much money, we are a very slim organisation and the technology is not that expensive which is good for the customers. So $1 million dollars will keep us on track this year.”