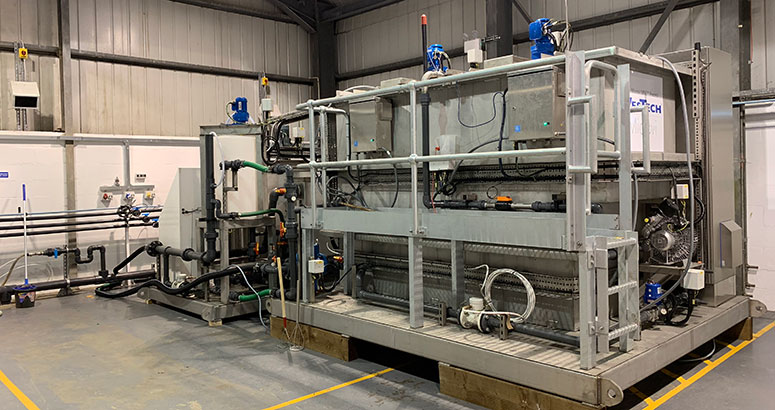 An innovative new technology developed in the United States which aims to revolutionise the way the world’s waste water can be processed has delivered promising results at an extensive UK trial.

A trial of Microvi’s MNE™ technology has been completed at Scottish Water’s Waste Water Development Centre at Bo’ness, by the Research and Innovation team.

The technology uses specially selected, naturally occurring bacteria which consume pollutants in waste water. It creates an optimum environment for these bacteria – known as biocatalysts – to make them work more efficiently. It is designed to intensify the population of the bacteria and speed up the rate the good bacteria out-compete the bad bacteria.

Microvi, a green technology company based in California, in collaboration with Scottish Water carried out a six-month trial of the process at the centre near Falkirk. It is part of a range of next-generation bio-technologies the US firm has designed for the water, waste water and renewable chemical industries.

During the trial the plant treated primary settled effluent taken from the Bo’ness Waste Water Treatment Works primary tanks which are situated right next to the test centre.

The main objective of the trial was to establish if Microvi’s MNE technology can achieve treatment performance of total BOD (Biological Oxygen Demand) and TSS (total suspended solids) of minimum 20 mg/l and Ammonia of minimum 5 mgN/l, which is the typical effluent consent requirement.

It was also to test if the Microvi MNE can achieve much tighter standards and reduce the amount of ammonia in the final effluent – with a target of total BOD and TSS of 5 mg/l and Ammonia of 1 mgN/l.

This is was an important element to the trial as wastewater sites face tightening consent requirements and finding out if this technology can achieve very low targets was one of the aims of the project.

The technology uses specially selected, naturally occurring bacteria which consume pollutants in waste water. It creates an optimum environment for these bacteria – known as biocatalysts – to make them work more efficiently. It is designed to intensify the population of the bacteria and speed up the rate the good bacteria out-compete the bad bacteria.

The technology aims to drastically reduce the amount of sludge produced. This happens as a result of the biocatalyst creating an environment where bacteria reproduction is limited. Reducing sludge cuts the energy, transport and chemical requirements to manage bio-solids and in turn means far less space needed for the treatment process.

The results of the trial confirmed the Microvi MNE process can treat ammonia and soluble BOD to below levels of detection at high flow and high organic loading rates.

It showed that under normal operating conditions the effluent consistently achieves effluent ammonia concentration below 1 mg/l with an HRT (hydraulic retention time) of around 4 hours – around half the time of other comparable current technologies including conventional Activated Sludge Process.

It also found that high levels of ammonia removal can also be achieved even at 2.3 hours HRT at temperatures as low as 10C, a considerable reduction against existing processes.

The trial also confirmed there was no net generation of sludge through the removal of ammonia and BOD with an average zero percentage change in sludge over the test period, which can lead to significant capital and operating cost benefits in the treatment and disposal of biosolids.

It confirmed Microvi’s waste water technology has significant advantages over conventional water treatment processes. It requires a smaller footprint and does not generate biological solids, while removing BOD, ammonia, phosphorus and nitrate. The solution is easy to use and can be used in existing infrastructure.

George Ponton, Head of Research and Innovation at Scottish Water welcomed the results of the trial. He said:

“The trial has highlighted the potential this innovative technology has to meet BOD and ammonia standards in a smaller footprint than conventional activated sludge systems. It showed Microvi can be an effective technology for process intensification at wastewater treatment works, allowing us to enable growth using less energy and a lower carbon footprint.

“This technology, has the potential to be part of our future asset base, enabling sustainable growth and improving process efficiency at Scottish Water’s treatment works.“

Fatemeh Shirazi, Microvi CEO thanked Scottish Water for the opportunity to demonstrate the technology to Scottish Water and the wider UK market, saying:

“The opportunity afforded by the facilities at the test centre has been incredible and has allowed us not only further develop the technology, but provide significant exposure to the UK market place. Our hope is that these results will give us the opportunity to soon implement the technology at full-scale, enabling the industry to reduce costs and improve service to customers and the environment.”

These strategies will now be tested as part of an extended Microvi MNE trial with funding from the Water Test Network. This is an EU funded project, led by Scottish Water, which aims to support SMEs to develop, test and verify new innovation to the water industry.

The Waste Water Development Centre at Bo’ness, the only facility of its kind in the UK, is situated next to a waste water treatment works making it a unique and dynamic research hub for waste water technologies. Users can test new processes, technologies and equipment under live conditions in a safe and operational scale environment to enhance the marketability of their products without risk to Scottish Water operations.

The centre provides three individual feeds of waste water from different stages in the treatment process. All discharges from testing areas enter back into the normal treatment process, offering a flexible and low-risk testing environment.

Microvi Biotech was named the 2019 Breakthrough Technology Company of the Year at the Global Water Awards which were held in London earlier this year.