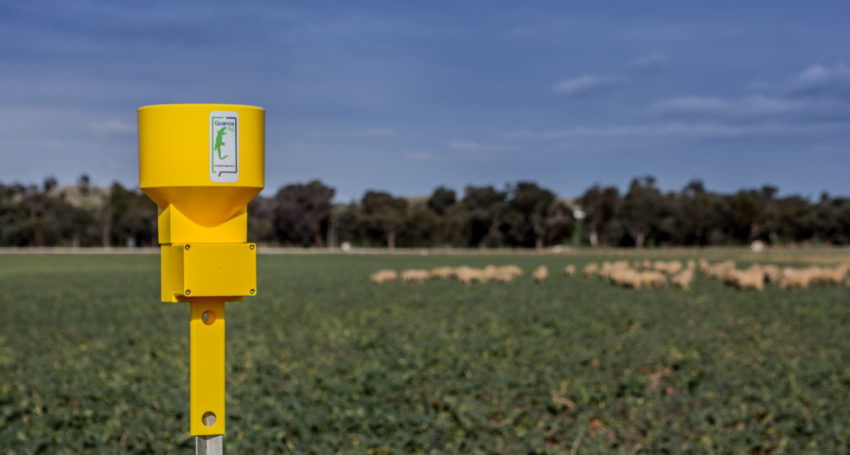 This Goanna Ag rain gauge will use Myriota's direct-to-orbit satellite network to share data with its owner. Image: Julian Simon-Nguyen

Australian farmers could soon be looking to the stars rather than the skies for their weather information following the development of a rain gauge that uses a satellite network to transmit remote rainfall data.

South Australian satellite communications company Myriota and Queensland AgTech business Goanna Ag have partnered to develop the ‘everywhere’ solution that they say will unlock the power of remote monitoring at a price and scale never seen before.

Myriota’s direct-to-orbit satellite network for the Internet of Things (IoT) means data from the devices can be transmitted in remote areas without internet or mobile phone coverage.

Goanna Ag has trialled a number of the rain gauges and water tank monitoring devices on Australian farms and is on the verge of commercial release with pricing and distribution currently being finalised.

Pre-orders for the rain gauge and tank monitoring products are open with commercial sales expected to commence in October.

Units are set to include three years of connectivity, data management and app access as standard.

Future iterations of the rain gauges are expected to have smart functionality including point specific weather forecasting generated by the Bureau of Meteorology, aggregated and granular rainfall mapping, and an initial on-the-go yield forecaster for dryland cropping.

Goanna Ag Chief Operating Officer Tom Dowling said the company had been working toward the solution for more than a decade.

“Thanks to our partnership with Myriota we have developed a game changing solution that will drive on-farm efficiencies – particularly around water management and optimization,” he said.

“Our clients know the value that comes from remote monitoring, but until now, the industry has been restricted by coverage and cost issues.”

Making the most of every drop of water is a challenge that Australian farmers have been dealing with for decades. This has been compounded by the impact of one of the worst droughts in living memory in many parts of Australia.

“With ground based communications requiring capital and geographical prioritisation, there will be ‘black spots’ where data is lost, but through this collaboration with Goanna Ag, we have been able to overcome these challenges of cost and connectivity.”

Spun out of the University of South Australia in 2015, Myriota last year raised $15 million through a Series A funding round, with Boeing HorizonX Ventures among the contributors. Last month it also became the first startup to sign an agreement with the new Australian Space Agency.

In May, it also announced a partnership with cloud-based environmental platform Eagle.io with the aim of preserving global water supplies.

The partnership will provide global software and telemetry solutions for water management issues faced by agricultural players and governments worldwide.

Myriota is based at space and innovation precinct Lot Fourteen in the Adelaide CBD, which is also home to the Australian Space Agency.