A consortium of leading US scientists and engineers  have proposed  that the United States and Mexico jointly build a large scale energy, water, industry, and education park park along the 1,954-mile border instead of a wall.

The proposal, by 28 prominent U.S. scientists and engineers, says that the effort would bring abundant energy and water to the region while also providing border security and economic stability.

According to the Purdue University-led national consortium, building an energy corridor along the border instead of just a wall would be a ‘giant leap for mankind,’ bringing security and jobs to the region.

The engineers and scientists from across the nation are proposing that the two nations work together on a massive infrastructure project: a complex train of solar energy panels, wind turbines, natural gas pipelines and desalination facilities that together would create an industrial park along the border unlike anything found anywhere else in the world.

The facilities would provide the desired border security, the researchers say, because utility facilities and infrastructure must be well-protected. The connected energy parks would also be an economic driver, both in the construction of the facilities themselves and in the businesses that would be attracted to the region by cheap electricity and plentiful water resources.

Luciano Castillo, Purdue University’s Kenninger Professor of Renewable Energy and Power Systems, and lead of the consortium, said that if it goes ahead, the mega infrastructure project would have a historic positive effect for both nations, describing it as “a national infrastructure project for the 21st century.”

According to Ronald Adrian, Regent’s Professor at Arizona State University and a member of the National Academy of Engineering, the proposal, although a huge undertaking, is worth serious study.

“At first blush the idea seems too big, too aggressive, but consider the Roman aqueducts or the transcontinental railroads — enormous undertakings that gave enormous benefits. The cost of providing basic, essential infrastructure to the border lands is tiny compared to the opportunities it creates.”

Carlos Castillo-Chavez, Regent’s Professor at Arizona State University, says a cooperative effort between the United States and Mexico to address the issues of the border region would reinforce the cultural ties that have existed for hundreds of years.

“All utility plants, pipelines and other energy production facilities have security — as any infrastructure will have under any conditions.”

“In addition to physical security features, such as multiple levels of fencing, these pipelines and facilities would also have electronic sensors and drone surveillance. This would allow areas for wildlife to continue to migrate while alerting officials to anyone crossing the border illegally.”

“This is a different kind of initiative that will solve many existing challenges while bringing people together. It will bring energy, water and education to create more opportunities for the USA and Mexico on both sides.”

The southwestern United States is dry and prone to drought — two of the world’s worst droughts in in the past 30 years have taken place there. Droughts, of course, limit or damage economic development and agriculture wherever they occur, and the chances of droughts in this region are expected to increase significantly in coming decades due to climate change.

California, Texas, New Mexico and Arizona are currently in a drought categorized as severe to exceptional and are using up groundwater resources, according to research conducted at the University of Saskatchewan.

The proposal offers a plan to increase water resources in the region in two ways:

According to Castillo availability of water would enable agriculture and manufacturing at levels the region has not seen before. He warned:

“Without this, over the next few decades the American Southwest is going to begin running out of water, and then you’re going to see another border crisis — but this one will be at the Canadian border where people will be rushing across to find water.” 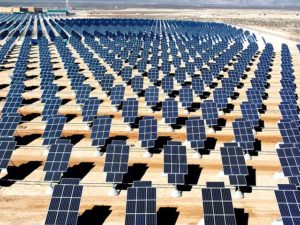 The region’s scarcity of water is in notable contrast to the availability of energy-producing resources.

The proposal notes that the energy corridor would enable load-shifting, in which electricity generated could be sent to the eastern half of the United States when demand is high and then to the western United States later in the day when the highest demand shifts to that region.

The authors of the proposal note two final components would be needed to bring the plan to fruition: private funding and an educated work force.

“A project of this magnitude must be a private-public venture driven by free-market forces. It would require assuring border security first, industrial-scale infrastructure second, and an educated workforce, third.  The private capital will flow to secure, infrastructure-ready and educated areas with great priority.”

“Over the years, I have learned from some of the most distinguished experts, including Nobel laureates, that for an entrepreneurial economic boom to happen it requires the availability of secure land, energy, water and an educated workforce.”

The proposal plans for at least three “energy security institute” campuses to be developed along the border where people from both nations can come to learn the skills needed to work in the wind energy, solar energy and natural gas industries.

“Universities within the four states, California, Texas, Arizona and New Mexico, should be convinced to establish partnerships with their Mexican counterparts across the border to establish curricula for workforce development at all levels to attract private investment by corporations and venture firms from around the world,” Gore says.

Luciano Castillo said the vision of the energy and water park would be to attract many businesses on both sides of the border in a broad and lucrative economic zone.

“Instead of being a region of conflict, the border area could become the largest industrial park of its kind in the world,” he added.