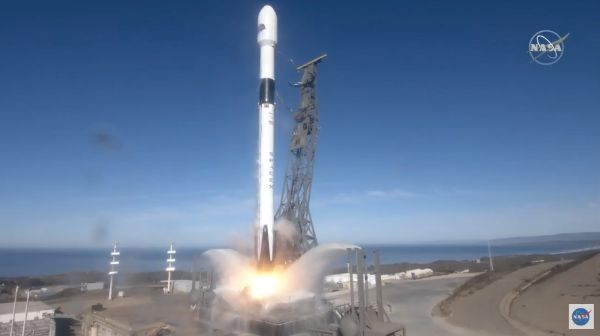 A joint U.S.-European satellite built to monitor global sea levels lifted off on a SpaceX Falcon 9 rocket from Space Launch Complex 4E at Vandenberg Air Force Base in California on Saturday at 9:17 a.m. PST (12:17 p.m. EST).

About the size of a small pickup truck, Sentinel-6 Michael Freilich will extend a nearly 30-year continuous dataset on sea level collected by an ongoing collaboration of U.S. and European satellites while enhancing weather forecasts and providing detailed information on large-scale ocean currents to support ship navigation near coastlines.

“The Earth is changing, and this satellite will help deepen our understanding of how,” said Karen St. Germain, director of NASA’s Earth Science Division. “The changing Earth processes are affecting sea level globally, but the impact on local communities varies widely. International collaboration is critical to both understanding these changes and informing coastal communities around the world.”

After arriving in orbit, the spacecraft separated from the rocket’s second stage and unfolded its twin sets of solar arrays. Ground controllers successfully acquired the satellite’s signal, and initial telemetry reports showed the spacecraft in good health.

Sentinel-6 Michael Freilich will now undergo a series of exhaustive checks and calibrations before it starts collecting science data in a few months’ time.

Sentinel-6 Michael Freilich will continue the sea level record that began in 1992 with the TOPEX/Poseidon satellite and continued with Jason-1 (2001), OSTM/Jason-2 (2008), and eventually Jason-3, which has been observing the oceans since 2016.

Together, the satellites have provided a nearly 30-year record of precise measurements of sea level height while tracking the rate at which our oceans are rising in response to Earth’s warming climate.

Sentinel-6 Michael Freilich will pass the baton to its twin, Sentinel-6B, in 2025, extending the current climate record at least another 10 years between the two satellites.

“The data from this satellite, which is so critical for climate monitoring and weather forecasting, will be of unprecedented accuracy,” said EUMETSAT Director-General Alain Ratier. “These data, which can only be obtained by measurements from space, will bring a wide range of benefits to people around the globe, from safer ocean travel to more precise prediction of hurricane paths, from greater understanding of sea level rise to more accurate seasonal weather forecasts, and so much more.”

JPL, a division of Caltech in Pasadena, California, is contributing three science instruments to each Sentinel-6 satellite: the Advanced Microwave Radiometer for Climate, the Global Navigation Satellite System – Radio Occultation, and the Laser Retroreflector Array.

NASA is also contributing launch services, ground systems supporting operation of the NASA science instruments, the science data processors for two of these instruments, and support for the U.S. component of the international Ocean Surface Topography Science Team. The launch is managed by NASA’s Launch Services Program, based at the agency’s Kennedy Space Center in Florida.