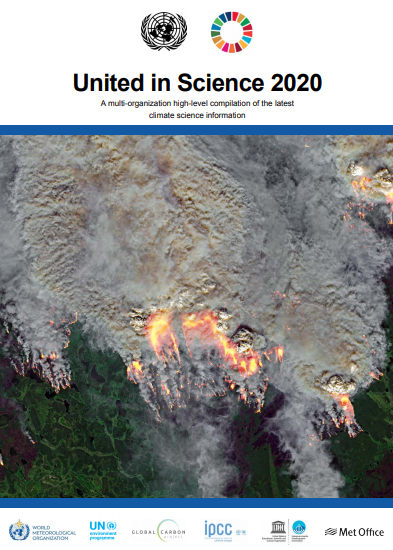 The report – United in Science 2020 – is warning that the increasing and irreversible impacts of climate change, are most often felt through water-related hazards like drought or flooding.

The report, the second in a series, is coordinated by the World Meteorological Organization (WMO), with input from the Global Carbon Project, the Intergovernmental Panel on Climate Change, the Intergovernmental Oceanographic Commission of UNESCO, the UN Environment Programme and the UK Met Office. It presents the very latest scientific data and findings related to climate change to inform global policy and action.

“This has been an unprecedented year for people and planet. The COVID-19 pandemic has disrupted lives worldwide. At the same time, the heating of our planet and climate disruption has continued apace.”

“Never before has it been so clear that we need long-term, inclusive, clean transitions to tackle the climate crisis and achieve sustainable development. We must turn the recovery from the pandemic into a real opportunity to build a better future. We need science, solidarity and solutions.”

Human-induced climate change is affecting life-sustaining systems, from the top of the mountains to the depths of the oceans, leading to accelerating sea-level rise, with cascading effects for ecosystems and human security.

Ice sheets and glaciers worldwide have lost mass. Between 1979 and 2018, Arctic sea-ice extent has decreased for all months of the year. Increasing wildfire and abrupt permafrost thaw, as well as changes in Arctic and mountain hydrology, have altered the frequency and intensity of ecosystem disturbances.

The global ocean has warmed unabated since 1970 and has taken up more than 90% of the excess heat in the climate system. Since 1993 the rate of ocean warming, and thus heat uptake has more than doubled.

Marine heatwaves have doubled in frequency and have become longer-lasting, more intense and more extensive, resulting in large-scale coral bleaching events. The ocean has absorbed between 20% to 30% of total anthropogenic CO2 emissions since the 1980s causing further ocean acidification.

Global mean sea-level is rising, with acceleration in recent decades due to increasing rates of ice loss from the Greenland and Antarctic ice sheets, as well as continued glacier mass loss and ocean thermal expansion. The rate of global mean sea-level rise for 2006–2015 of 3.6 ±0.5 mm/yr is unprecedented over the last century

Climate change impacts are most felt through changing hydrological conditions including changes in snow and ice dynamics.

The cryosphere is an important source of freshwater in mountains and their downstream regions. There is high confidence that annual runoff from glaciers will reach peak globally at the latest by the end of the 21st century. After that, glacier runoff is projected to decline globally with implications for water storage.

It is estimated that Central Europe and Caucasus have reached peak water now, and that the Tibetan Plateau region will reach peak water between 2030 and 2050. As runoff from snow cover, permafrost and glaciers in this region provides up to 45% of the total river flow, the flow decrease would affect water availability for 1.7 billion people.

The report is also warning that global methane emissions from human activities have continued to increase over the past decade. Current emissions of both CO2 and methane are not compatible with emissions pathways consistent with the targets of the Paris Agreement.

Referring to the UN Environmental Programme’s Emissions Gap Report 2019, transformational action can no longer be postponed if the Paris Agreement targets are to be met, the report says.

The Emissions Gap in 2030 is estimated at 12-15 Gigatonnes (Gt) CO2e to limit global warming to below 2 °C. For the 1.5 ° C goal, the gap is estimated at 29-32 Gt CO2e, roughly equivalent to the combined emissions of the six largest emitters.

Looking beyond the 2030 timeframe, new technological solutions and gradual change in consumption patterns are needed at all levels, according to the report – and both technically and economically feasible solutions already exist.