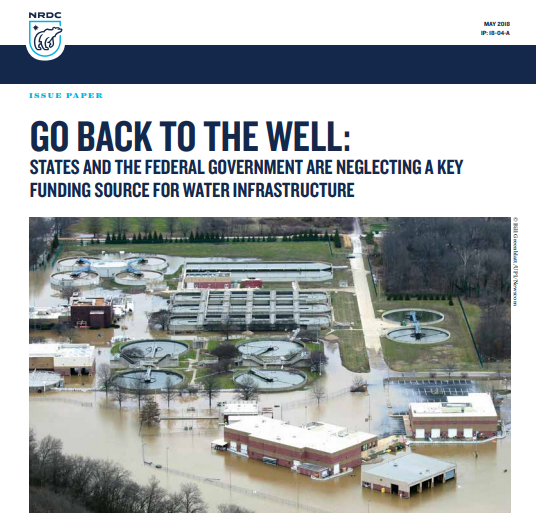 A new report published by the Natural Resources Defense Council (NRDC) is warning that States and federal government are neglecting a key funding source for US water infrastructure.

The organisation said the funding gap for United States water infrastructure could be well in excess of $1 trillion.

Many decades-old drinking water, wastewater, and stormwater systems do not meet existing environmental and public health standards, the NRDC says, and even more systems will need to be modernized to continue to meet the standards.

In addition, US water infrastructure was never designed to meet the impacts of climate change, including the increasing frequency of droughts and sea level rise.

The report Going Back to the Well says many existing decades-old US drinking water, wastewater and stormwater systems will need to be redesigned or relocated, with many treatment plants needing  to be modernized or replaced.

The U.S. Environmental Protection Agency (EPA) has estimated that the nation would need nearly $745 billion to simply meet and maintain existing health and environmental standards – made up of $472.6 billion for drinking water and $271 billion for sewage systems and stormwater.

The estimate does not include the potential costs of climate change and the number of water systems that, as a result, will need to be re-engineered—and in some cases relocated—to cope with sea level rise, floods, and droughts.  The NRDC says that the nation may need an additional $448 to $944 billion by 2050 to adequately address the issues.

Repairing damage to water infrastructure from the impacts has already cost the Federal Emergency Management Agency (FEMA) $7.4 billion between 1998 and 2014 just to repair water and sewer infrastructure damaged by floods and coastal storms. Other costs in recent years have included:

The NRDC report has also flagged up a study by Argonne National Laboratory and the University of California-Berkeley which found that three feet of sea level rise would put 162 wastewater treatment plants serving 10.4 million Americans at risk of flooding. Six feet of sea level rise would see the numbers increase to 31.6 million people at risk from 394 wastewater treatment plants.

According to the NRDC, while the funds have provided $151.2 billion in financial assistance since their inception, their full potential remains untapped and increased federal financial support for State Revolving Funds (SRFs) is needed to help close the funding gap.

It also suggests that states need to make use of their ability to issue SRF-backed loan guarantees to communities, enabling communities to more easily and cheaply raise funds from private financial markets. The NRDC has is calling on federal and state governments to take the following actions:

“Despite the looming funding gap, states aren’t thinking about how to meet that future need and are essentially funding water infrastructure the way you or I would manage our checking account.”

“Each year, they just add up how much EPA gives them, plus a small state match, and that’s the amount of assistance they plan provide to help communities fix their drinking water and sewer systems. That’s not going to cut it.”

“Using more creative financial tools, like issuing bonds and using their SRFs to issue loan guarantees could greatly expand infrastructure funding. Those increased funds could determine which states are prepared to weather the coming storms.”