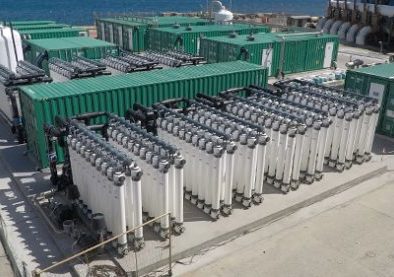 ACCIONA Agua has completed construction of a desalination plant that will provide high-quality demineralised water to the Sarlux refinery (part of the Italian energy group Saras Spa), located in Sarroch, near Cagliari, in Sardinia, Italy. The plant will be operated by ACCIONA Agua for the next six years, with an estimated daily production of 12,000 m3. The contract, worth 22 million euros, includes design and construction of the desalination plant as well as operation and maintenance for six years, with a possible three-year extension.

The plant has a daily production capacity of 12,000 m3 of demineralised water through such processes as ultrafiltration, reverse osmosis and electrodeionisation (a continuous process to obtain ultra pure water without the need for chemicals).

The treated water will be used in industrial processes carried out by the Italian energy company at its refinery near Cagliari, one of the largest and most complex facilities of its type in Europe.

With a total footprint of approximately 1,260 m2, the plant is the largest desalination plant for industrial use in the Mediterranean.

In the design and construction of the plant, ACCIONA Agua incorporated solutions that minimise environmental impact, costs and installation times, and improve efficiency in overall operation by reducing pressure losses and significantly optimising energy consumption, among other factors.

The company described the plant as a step forward in the strategy to diversify its industrial project portfolio in Italy, where it has had a presence since 1999 and where it has extensive experience in construction, operation and maintenance of water treatment facilities.

ACCIONA Agua currently has a portfolio of more than 40 projects in Italy, including drinking water, desalination and waste water treatment plants. It provides services to more than 2.5 million people in Italy and has 345 employees in the country.

The company was recently awarded a contract to maintain and upgrade the water and sewage networks in several municipalities of the Florence province, in the Tuscany region.

The company has been entrusted with maintaining and upgrading the water supply and sewer networks for Turin province, in Piamonte, one of the most important regions in the north of Italy.

On the Pelagie Islands (Pantelleria, Linosa and Lampedusa), the company operates modular desalination plants under a 10-year drinking water supply contract. The company has also carried out major sewage treatment projects in such regions as Sardinia, Lazio, Piamonte, Toscana, Liguria, Emilia Romagna, Apulia and Sicily. Among others, the company built the extension of the Guidonia sewage treatment plant in Rome (serving 45,000 people) and the biofiltration plant in Scicli, as well as upgrading several plants in Bari, Nuoro and Bresso, in Milan.