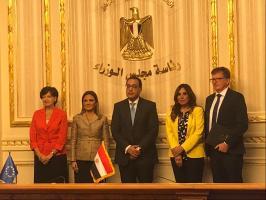 The European Investment Bank (EIB) has signed the first finance agreement worth €126 million (out of a total financing support of €172 million) to improve wastewater infrastructure and access to sanitation services in the Fayoum Governorate in Egypt. The Fayoum Wastewater Expansion Project, part of the EIB’s new Economic Resilience Initiative, is intended to improve sanitation services for up to approximately 940,000 people, raising health and living standards and stimulating economic activities in the Fayoum Governorate.