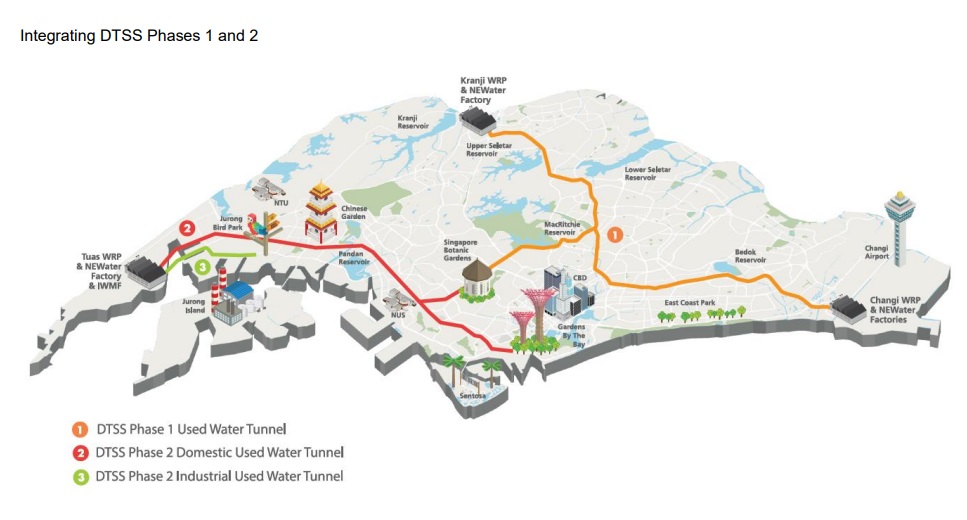 Over the next seven years, they will develop the detailed design and construct some 30 km of deep tunnels and link sewers as well as the associated ancillary structures.

The tunnels are part of a network of 40 km of deep tunnels and 60 km of link sewers for DTSS Phase 2 which will be built using the tunnelling method – construction work will commence in end 2017. The subsequent contracts to build the rest of the deep tunnels and link sewers will be awarded from 2018.

“The deep tunnels are an integral part of the DTSS, conveying every drop of used water for treatment and channelling it for further reclamation into NEWater. As the backbone of NEWater production, the DTSS ensures the sustainability and resilience of the used water network to facilitate large-scale water recycling in Singapore, and contributes to the goal of increasing the overall water recycling rate from 40% to up to 55% of total water demand in the long term.”

The network of 100 km of deep tunnels and link sewers will connect to the Tuas Water Reclamation Plant, which is expected to be completed in 2025. By then, the whole of Singapore will be served by the DTSS to convey used water entirely by gravity to centralised to three centralised water reclamation plants for treatment. It  is then further purified into ultra-clean, high-grade reclaimed water called NEWater, with excess treated effluent discharged to the sea.

DTSS Phase 1, comprising the North and Spur Tunnels, the associated link sewers, the Changi WRP and outfall, was completed in 2008. A NEWater factory, located on the rooftop of the Changi WRP, was built in 2010 to facilitate large-scale water recycling. Expected to complete by 2025, DTSS Phase 2 will extend the deep tunnel system to cover the western part of Singapore, including the downtown area and major upcoming developments such as Tengah Town.

Under DTSS Phase 2, a NEWater factory to be integrated with the Tuas WRP will be built to facilitate water recycling, contributing to the goal of increasing NEWater supply from 40% to up to 55% of total water demand in the long term.

Once Phase 2 is in place, the existing conventional WRPs at Ulu Pandan and Jurong, as well as intermediate pumping stations, will be progressively phased out and the land freed up for higher value development. The implementation of the entire DTSS will result in a 50% reduction in land taken up by used water infrastructure once it is fully completed.